SPOILER ALERT: This movie is best watched if you know less about the story.  This post may give away more that you want. 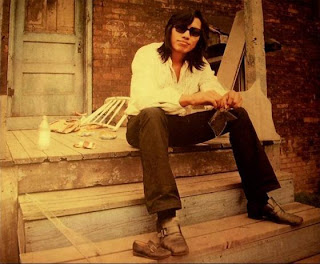 The Sundance Film Festival is always at its best when it's telling surprising stories. My Sundance experience is off to a great storytelling start with Searching for Sugar Man from director Malik Bendjelloul.

This is the story of Rodriguez, a 70s rock musician who seemed to have a promising talent.  However, his recording career flopped dramatically in almost every country on the planet. Almost. In the South Africa of Apartheid, his music took hold. There, his legend grew as did his music's popularity. His South African fans came to believe that he may or may not have committed suicide on stage by shooting himself in the head, lighting himself on fire, or over dosing on drugs.

Turns out, none of that was true.  He was living in Detroit working construction.  What makes Searching for Sugar Man so exciting are the non-stop surprises. It's hard to believe this story is true.  And Rodriguez is a perfect inspiration.  More than once I found my eyes misting over. I started this movie thinking I was going to have to sit through another Sundance "tortured artist" movie. I left feeling I'd experienced a story of humanity.

Director Malik Bendjelloul gets a big round of applause for making some brilliant documentary decisions. The movie trots along at a delightful clip, which means the surprises pile up faster than expected. And Rodriguez is fantastic. He showed up at the screening where he stayed true to his every-man ideals.  Even though he's started to gain the recognition he never achieved in his youth, he still lives in his old Detroit home and continues to work construction.  He also gives most of his money away.  Why? Well as he said at the screening, "It ain't about the money. I'm doing it for rock and roll history."

Here's a picture of Rodriguez (left), one of his daughters (center), and the movie maker at the very first Sundance screening ever at the Salt Lake City library. 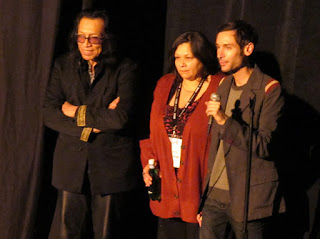 Oh, and by the way, Rodriguez's music is more than likable, like this catchy tune, I Wonder.