SPOILER ALERT: Simon is a jerk! 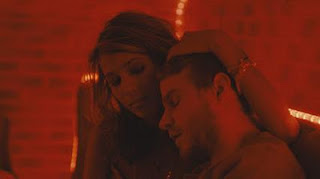 Even with all those classic indie chestnuts, Simon Killer lacked the necessary goods to guarantee Sundance mega-hit status. That doesn't mean there isn't plenty to like about the film. This is a beautiful movie. The direction and cinematography are so tightly integrated that the movie brings real innovation to the art film. Frequently the scenes are cropped so that you don't see the actors heads and faces, just their torsos.  And much of the movie is shot following the actors from behind, again obscuring the their faces.  You'd think this would make it difficult to connect with the characters. Instead these directorial choices create unnerving tension that heightens the movie's intrigue.

I also liked the lead actors. Brady Corbett as Simon is charming and sexy.  You can see how the women of Paris might fall for his quirky good looks and strange friendliness. And Mati Diop is perfect as the tragic yet vulnerable prostitute. I'll bet we'll see them both again at Sundance.

But all the good of Simon Killer can't seem to overcome the bad. I found the whole affair tedious. Even scenes I liked ultimately bored me because they dragged on endlessly. Take the scene where Simon is at a club dancing with his latest Parisian conquests. At first the music and Corbett's dancing and the crowd intoxicated me. But as it continued, it lost its luster and diminished the effect.

It will be interesting to see if this film finds distribution.