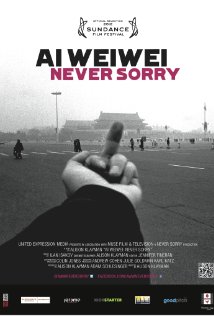 The two movies I wanted to see most at this year's Sundance Film Festival were both about contemporary art. Marina Abramovic The Artist is Present is a stunning view of art as performance. Art as protest is the central theme in Ai Weiwei: Never Sorry from director Alison Klayman. While completely different in look and feel than the Abramovic documentary, this movie is just as engaging.

Klayman, who if I had to guess is only in her late twenties, does a great job of balancing the movie's focus between Ai Weiwei's gallery art and his more esoteric protest art. She tracks the artists attempts to identify all of the schoolchildren killed in the 2008 Sichuan earthquake.  Weiwei takes on this task because the Chinese government refuses to provide the information amid public outcry that the schools were built without necessary precautions to prevent earthquake damage. The artist tracks his efforts on his blog, becoming a hero of many working Chinese.

When the government shuts down his blog, Ai Weiwei turns to twitter to continue his criticism of the Chinese authorities and their lack of transparency. In the end, the artist is imprisoned for several months and still is not allowed to leave Beijing. While many have spoken about the power of social media in the Arab Spring uprisings, few seem to mention its importance in places like China. I'm glad this movie explores the value of social media in China, because I found this example even more compelling.

But Ai Weiwei isn't just an activist, he's also an artist. And Klayman's film is more interesting because she provides insight into the artist's history and follows him as he works on some of his largest projects. The context provided by the film makes Ai Weiwei's work more compelling. On the surface, 100 million hand-painted porcelain sunflower seeds spread across the floor of London's Tate Modern may seem like just another meaningless Art-world stunt. But with the right context, it might be a commentary on China's working class and the issues they face. Smashing Chinese antiquities could be another bad-boy artist's attempt to shock the world and gain publicity. Or maybe it's a defiant reminder that old ideas need to change.

Ai Weiwei: Never Sorry is a movie with enough content that just about everyone will find something that will speak to them personally. And, like me, I'll bet you'll leaving the theater committed to being more courageous and more willing to stand strong in the face of authority.