OK so I don’t really like the canned meat product. But the touring production of Monty Python’s Spamalot was sure tasty. Taking its cue from the movie, Monty Python and the Holy Grail, this show delivered some of the classic humor any child of the 70s remembers. That was expected.

What wasn’t expected was the savvy send-up of Broadway musicals. Monty Python irreverence was used to make fun of just about everyone and everything on Broadway. No one can a make a mean joke like the Monty Python crew. And the reason those sometimes cruel jokes work so well is that we never question the intention—we somehow know that each and every comic dagger is thrown with a little affection.

The Broadway parodies begin early with the appearance of the leading lady, The Lady of the Lake. She represents a musical theater mash up of divas from Cats, to Phantom, to Beauty and the Beast, and to just about any other Broadway diva you can name. The fun continues when we discover that “You Won’t Succeed on Broadway” if you haven’t any Jews. And Sir Lancelot comes out of the closet in a flashy, gay spectacle.

Don’t get me wrong. I like many of the shows that Spamalot skewers. But they can be sappy, and predictable, and just downright stupid—giving the Monty Python crew plenty to lambast. But hidden within the comic critique, as with most Monty Python satire, is a hint of love; a sense that the creators may harbor a soft spot for the sappiness, the predictability, and even the stupidity that is sometimes Broadway.
Posted by Jeff at 10:39 AM No comments: 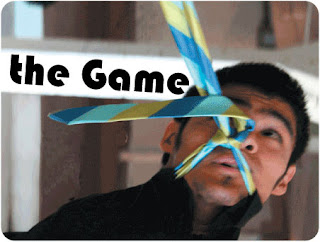 I first heard about The Game in a New York Times article about the New York Fringe Festival. No one expects Utah to produce anything interesting enough to make it to Fringe so the Times called it out with an air of disbelief.

Here’s the idea: a bunch of dancers; no choreography; “variety show antics;” lots of improvisation. Combine it all together in hopes of creating a one-of-a-kind dance performance. And oh yeah, one dancer wins in the end by proving him or herself in the evening’s activities.

The result was pretty dang good, thanks in large part to some impressive dancing from some young performers. I was most impressed with the men. I may have seen some of these dancers at a past Pickle Company performance, but they weren’t as good then as they were in The Game. Jersey Rio Riemo stole much of the show with beautiful, controlled movement. He “won” in the end. But Juan Aldape and Graham Brown were also good. Even Chris DelPorto, who obviously comes from the martial arts world, was fun to watch. (Although the slow motion, roundhouse power kicks got old fast.)

Sure, a few scenes dragged on to tedium and some performances felt forced or gimmicky. But overall it was a fun show and served as a reminder that experimental dance is alive and well in Salt Lake City.
Posted by Jeff at 10:39 AM No comments: 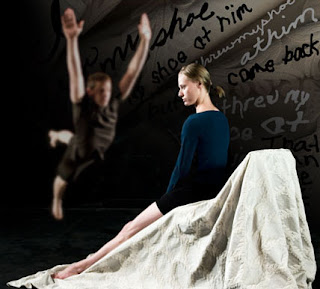 I’ll admit it, I don’t like programmatic dance. You know; dances that waste too much effort telling stories rather than delivering artistic dance performances. So maybe it isn’t surprising that I didn’t much care for Erik Stern’s Demolition Derby.

Sitting through the performance felt more like watching a public service announcement for Alzheimer’s than experiencing contemporary dance. There was enough dialogue for the performance to qualify as a college lecture. And a dry lecture at that. I’ve questioned this before but it’s worth repeating here, “What’s up with everyone asking dancers to deliver lines?” The dancers are seldom good at it and it just distracts them from dancing. Maybe it’s time to shut up and dance.

You may think I’m exaggerating about the PSA-like nature of this presentation. But at a panel discussion afterwards, the choreographer announced that the show will be traveling to New York City for a future performance. And guess who’s sponsoring the whole deal? A large pharmaceutical company about to release a new Alzheimer’s drug. Seriously, have the drug companies taken over the world?

Lest you think I’m just being snarky, I should say that the performance was not all bad. The music was great. The soundtrack was a combination of recorded and live music. The live music was original and performed by the composers, Aaron Chavez and Thomas Priest. It's amazing how much musical variation can be generated from a percussionist and a guy with a piano and a bassoon. Mr. Chavez gets extra points for some nifty marimba work and a dazzling performance on the hubcaps.

But even superior music couldn’t elevate the rest of the performance to greatness. And in the end, “demolition derby” is an accurate description of a show that's obvious and little banged up.
Posted by Jeff at 1:09 PM No comments: 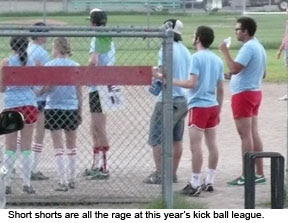 After a scorching hot summer, nothing makes me happier than the arrival of the kick ball league. My bedroom looks out over Herman Franks field. And while the ball fields are home to little leaguers for most of the spring and summer, the kick ballers arrive in late August, signaling a change in the seasons.

The kick ball league is pure silliness. Uniforms consist of an official league t-shirt with a change in color to identify different teams. Teams are generally a hodgepodge of hipsters, geeks, athletes, and parents with kids in tow. This last group a strange reversal of the little league crowd with parents in the stands and kids on the field.

Then there’s the game itself, with its over-sized bouncy red ball. People, adults in particular, just look goofy knocking around a big red ball. And that’s OK. Because it’s obvious everyone in the league is there for the good time.

This year, the powder blue team upped the ante sporting short shorts and striped tube socks worn high—a strange throwback to the basketball uniforms of the 70s. As if kick ball didn’t already make me smile. The new uniforms made me giggle out loud.

Thanks Kick Ball League for making the neighborhood a little more fun. And I’m cheering for the short shorts.
Posted by Jeff at 12:58 PM No comments: