The Ungovernables at the New Museum

Three years ago, the New Museum was in a new building and hosting its first-ever triennial titled Younger Than Jesus, an exhibition that featured work by artists 33-year-old and younger. This year, the triennial is back, and I decided why ruin a perfect attendance record.  So Felix and I returned to the New Museum for the second iteration of the triennial, this year titled The Ungovernables, a show with a definite point of view.

Organized by Eungie Joo with curatorial assistance from Ryan Inouye, The Ungovernables once again looks to a newer generation of artists for its inspiration.  However this generation seems more restless, more willing to confront authority, and to be quite frank, more angry. Works in the exhibition are infused with social attitudes that demand change.  This art questions governments and social norms that have existed for decades, even centuries.  And the result is an in-your-face exhibit that requires more explanation than I might normally like.  Without the commentary the curators provide for the exhibit, it wouldn't be nearly as effective. Usually, I don't like to be told the meaning of art.  But for this heavy show, I didn't mind. Here are a few highlights.

A person loved me (2012, clay, wood, metal, cement, Styrofoam, burlap, sand, and paint) by Adrian Vilar Rojas feels like we've just to stepped into the far future only to be confronted with ruins form a future past. Still, it felt strangely relevant in a world that's in a state of constant destruction and reinvention.  From natural disasters, to war, to urban decay, this work eerily reminds us of the tumultuous world we live in. 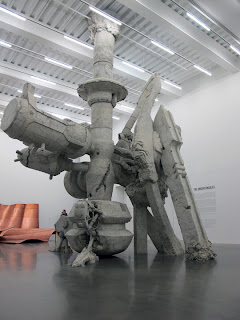 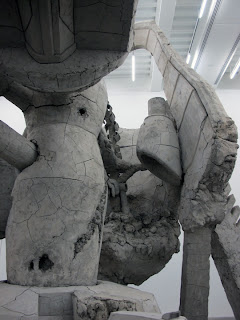 For WE THE PEOPLE (2011, pounded copper), artist Dahn Vo worked with craftsmen in China to produce a full-scale reproduction of the exterior skin of the Statue of Liberty. Then segments are shown in museums around the world, which "emancipates Liberty Enlightening the World from her symbolic burden." This work boldly proclaims that America's corner on the Liberty market may have come to an end as people the world over take control of their lives and establish new concepts of liberty. 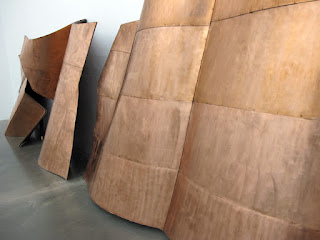 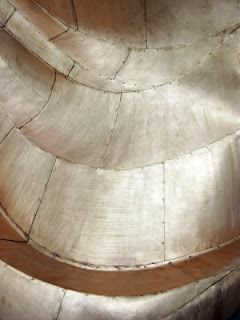 Amalia Pica's Eavesdropping: Version #2 Large (2011, found drinking glasses and glue) is witty and charming. I like it's subtle commentary on our gossip-crazed society. Or maybe it's an even more ominous commentary on our loss of civil liberties. 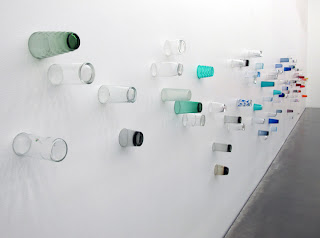 There's a small nook along a narrow staircase that runs between floors in the New Museum.  There are always interesting works tucked into this small space. For the triennial it was Dark Day (2012, found materials, paint, collected debris) by Abigail DeVille.  In this work the artist "uses material that might appear worthless or empty of content." That translates into a bunch of detritus covering the floor.  But not just the floor. The ceiling of the nook has been opened up to reveal a shaft that reaches high into the building.  The entire space has been encrusted with materials that appear "worthless or empty of content." 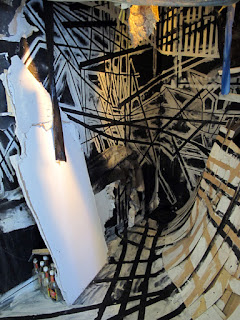 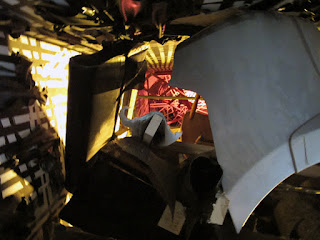 This work is part of one theme that hovered over many of my museum visits. It's a theme best described with a scene from Steve Martin's novel An Object of Beauty in which a group of collectors talk about current popular genres of art including my favorite, "junk on the floor." (One collector comments on the category saying, "You walk into a gallery and there's stuff strewn everywhere. I've got three of those.")  The New Museum had at least one at this show.  And wait 'til we get to the Whitney Biennial.

The Propeller Group, established 2006 in Ho Chi Minh City, is a cross disciplinary structure for creating ambitious art projects. For the New Museum triennial, they initiated a project that provokes political discussion for its contradictions and subversive humor.  The project is called TVC Communism (2011, five-channel synchronized video installation and LED monitor, color, and sound).  Over a three-week period, the group filmed employees at the offices of TWBA an international advertising firm that represents companies like Pfizer, Apple, and McDonald's. The Propeller Group asked the creative teams to develop a political campaign to re brand Communism; give it a new face; to answer the question, how would we sell the idea? The result is a video installation that puts the viewer at the center of a series of meetings featuring advertising professionals discussing ideas for making Communism fun again!  The result is an animatic playing on a near monitor where we learn that "This is the new communism. Everyone's welcome." Mad Men never seemed so populist. 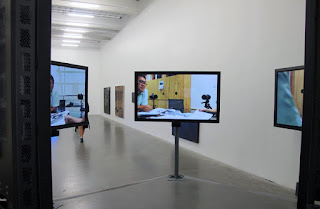 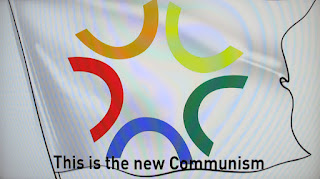 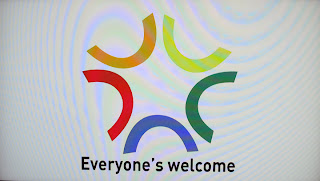 Jose Antonio Vega Macotela offers Habemus Gasoline (2008, tequila distiller, pipes, tamaleras, electric heaters, glass bottles, crude oil). This work discusses an energy policy which disproportionately benefits America.  More than one million barrels of crude oil are exported from Mexico to the USA daily.  Here they are refined into gasoline and then  ulitimately sold back to Mexico as gasoline. For The Ungovernables the artist constructs a rudimentary refinery using materials more commonly found in the production of tequila. 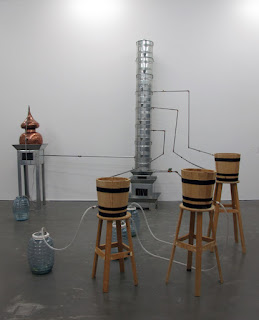 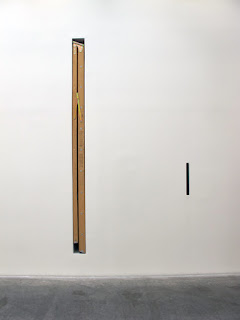 Finally I make this observation: Is it just me, or are the curators of the New Museum triennial playing a little curatorial joke.  Three years ago one of the more amusing works at the triennial was Adriana Lara's work Installation (Banana Peel) which consisted of an actual banana peel left on the floor of the museum.  (Interestingly, this same work appeared in Salt Lake City about a year later as part of the UMFA's Salt Series).  If memory serves, in almost the exact same place in the museum, this year's triennial featured a similarly dangerous work of art: Cinthia Marcelle's All This This Here (2012, bucket and liquid.)  Shouldn't there be a "Caution: Wet Floor" sign somewhere near by.  I just hope the curators keep this running joke aliver. At the next New Museum triennial, I expect to see a Wylie Coyote-like oil spill, or bucket of marbles unleashed on an unsuspecting crowd. 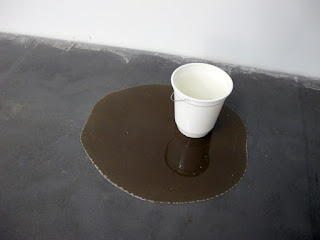