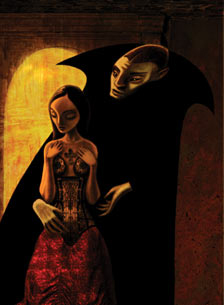 It's Halloween so I figure there's no better day for a post about Pioneer Theatre Company's (PTC) current production of Bram Stoker's Dracula.  I recently read a modern vampire tale, The Passage.  In that book, there's a scene where one of the main characters, Peter, watches an old vampire movie.  And he comments on how slow Dracula moves compared to his experience with vampires.  A little bit, this production felt the same way.  Yes I know that's because I've been desensitized by Hollywood's ability to produce stuff that's faster, bigger, more spectacular, and scarier than pretty much anything PTC can put on stage. But it's still a valid point.
Nonetheless, there is plenty to like about Charles Morey's stage adaptation of Stoker's classic novel. The play delivers a spooky Victorian attitude that I liked.  It made me want to know what it would be like to read a scary, strange story at a time before TV, Movies, or CGI.  And PTC did get my heart racing several times during the production.
Mark Elliot Wilson is creepy and repulsive as Count Dracula.  And isn't that what you want from Dracula? Bob Ari delivers a perfect, Victorian version of Abraham Van Helsing.  I also liked Stephanie Fieger as Lucy Westenra, but aren't we glad that women have progressed since the late 19th Century.
What I like best about PTC's Dracula is the staging and direction.  The set is great.  But it wouldn't be as great if it weren't used so skillfully by director Morey.  And none of that would have mattered if it weren't for Kendall Smith's lighting design.  This is one of the best lit shows I've seen at PTC.
If you're in the mood for some scary theater, you've got one more week.  Bram Stoker's Dracula runs through November 6.
Posted by Jeff at 11:26 AM No comments: 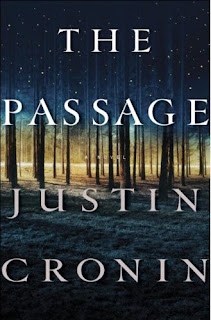 The Passage by Justin Cronin is part Suzanne Collins' Hunger Games, part Cormac McCarthy's The Road, part sweeping fantasy epic in the tradition of Tolkien, and part the Bible.  This is one ambitious work of fiction.  And Cronin's writing lives up to the high bar he's set for himself.  Clocking in at more that 17,000 kindle units (that's about 800 pages for you old-school readers), this book has real thud factor; although I guess as a Kindle user that doesn't make any sense since even a book this big weighs only 8.7 ounces.
Cronin is a story teller.  His writing is crisp, clean, and descriptive. In fact many moments in the book are almost magical.  I loved the scene where soldiers and one of the central characters, Peter, watch the movie Dracula.  At this moment in the future, the movie is more than 150 years old, and it's the first movie Peter has ever seen.  Cronin brilliantly balances the rowdy soldiers (who've seen this movie so often they know all of the dialogue) with Peter's quiet awe and emotional engagement.  It's surprising how Cronin even manages to make the movie relevant to the story he's telling.
While the writing is almost always good, The Passage can get tedious, at least for me who may not be the best critic to read an apocalyptic vampire book, particularly when I'm reading it on the heels of the Hunger Games trilogy.  My friend Felix, who read The Passage before me, delighted in confusing me by asking questions like, "Have you gotten to the part where Katniss and Peta (characters from the Hunger Games) fight off the virals at the compound (a plausible moment in The Passage)?"  It was confusing because it seemed like a logical plot development in either book.
It can also be tedious when it gets to the endless walking and the driving and the horseback riding.  Many of those passages reminded me of The Road, only longer.  And you know how I felt about The Road. I'm one of the few people who didn't like it. But being compared to McCarthy isn't necessarily a bad thing.  Almost everyone I know liked the book and the critical acclaim for McCarthy's writing should make Cronin feel good about my comparison.
More interesting were the Biblical elements of the story.  Yes the endless lists of names in the tradition of so-and-so begot so-and-so could be tedious. But what about the twelve tribes of vampires, scattered across the land.  And Amy, the benevolent, eternal entity who is their only hope for departing their painful earthly existences and passing peacefully to a next and better life. Cronin is an ingenious craftsman, and the fact that the story can take on Biblical proportions without becoming preachy is a testament to his talent.  I also like that it's a nod to our collective traditions of religious story telling.
That brings me to the ending.  Here's where I might get a little bit cynical.
Really?
Really.
Really!
This isn't an ending.  In fact, I think I just read an 800 page prologue. Justin Cronin has me right where he wants me.  Because I'd like to know how this book ends.  And apparently someone forgot to include it in the first printing.  Looks like I'll have to buy the next episode.  But there damn well better be an ending in that one.  Or I will refuse to buy book three as a matter of principle.  I joke only slightly.  Sure Babcock gets killed and we learn more about the fate of humanity but none of the core stories are resolved in any rewarding way. And after investing in 800 pages, I'd like to walk away without feeling like the ending was MIA.
Posted by Jeff at 10:05 AM 2 comments: 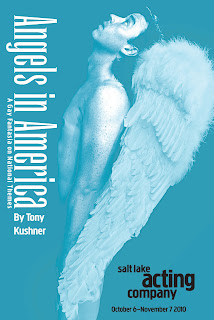 Here in Zion, we recently went through another gay debate as Boyd K. Packer reminded homosexuals where they fall in God's plan and the gays responded with indignation and more than one cheap shot. All this while gay teens are killing themselves at an alarming rate and everyone from Tim Gunn to a Texas City Councilman try to convince them that it gets better.
Against this backdrop, Salt Lake Acting Company (SLAC) offers its new production of Tony Kushner's Angels in America.   And it's a reminder how much things have changed in the last 15 years, and how much they've stayed the same.  Certainly AIDS is no longer the absolute death sentence it once was.  And I don't think any of us ever imagined 15 years ago that gay marriage would be legal in six states.  Yet the disdain, even disgust that many feel for homosexuals is alive and well.
SLAC can sure do a lot with not a lot of theater. Without the capabilities of many of Salt Lake City's larger theaters, SLAC has to be more ingenious in staging plays.  Keven Myhre's set is a brilliant, travel-induced dream of lost luggage that helps fuel the story's crazed, globe-spanning hallucinations.  Myhre also directs this production with an almost Shakespearean sense of tragicomedy.
But the real reasons the show works are good actors delivering Kushner's brilliant dialogue.  Alexis Baigue crackles as Louis Ironson, the neurotic gay Jew who can't deal with a dying lover. Charles Lynn Frost makes you hate Roy Cohn, and at the same time somehow understand this complex character.  Alexander Bala is perfectly conflicted as the struggling, married Mormon trying to balance his sexuality with the rest of his life.  And I loved Colleen Baum as the mother, who convincingly communicates the difficulties of unconditional love.
In the end, this is a play that remembers, as Kushner's characters remind us, that "Love is hard."  It's hard if you're straight.  It's hard if you're a mother who learns her son is gay.  It's hard if you discover that your husband is gay.  And it's really hard if you're a man who falls in love with another man.  But Angels in America makes me want to stand on the side of love, no matter how hard it is.  And if we all do that, maybe the world will be a different place 15 years from now, when SLAC hopefully revisits this powerful play. 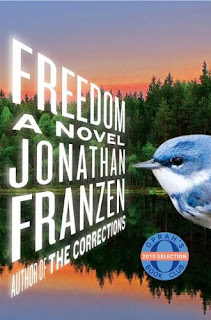 SPOILER ALERT.  There are comments in this post that give away elements of the ending.
When Jonathan Franzen's new book Freedom hit stores, it seemed like the book world could talk about nothing else. The reviewers raved endlessly about Franzen's amazing talent and modern story-telling ability.  So how could I not read the book.  But I downloaded it with a good deal of skepticism; I mean really, there's no way this book could be that good.  Mr. Franzen seems happy to prove my skepticism wrong.  This book is brilliant.
Franzen's writing is effortless.  So effortless that you sometimes forget how beautifully descriptive and observant it is.  It's hard to believe that Franzen is single with no children because he writes about family relationships with such precision that it infiltrates your mind and forces you to confront your own personal relationships.  I consider myself a pretty stable, well-adjusted person who's lived his life through strong family ties and no "psychological" issues. But this book called my stability into question, asking me to think about many of my relationships and how I've been unable to maintain some of them.
I loved the symmetrical structure of the book; the gossipy neighbors that inform the opening and closing; the dual third-person journals that fit just inside the opening and the closing (by the way my dislike of first-person writing seems justified in this book as Franzen chooses to have a character write her journals in third person); and the central sections that make you both love and hate key characters.
Freedom is long, clocking in at more than 12,500 Kindle units (beep boop bop bop beep). But it never reads long.  I never felt like the writing needed editing. And Freedom is often so engaging that I would re-read passages not to make sure I understood the meaning, but to just enjoy the writing.
For a book that loves depression and mental issues, Freedom offers a wonderful, happy ending, giving me hope that even if I've screwed up some my personal relationships, they might turn out alright after all.
Posted by Jeff at 7:19 AM 3 comments:

Book twenty-eight: Comedy in a Minor Key by Hans Keilson. 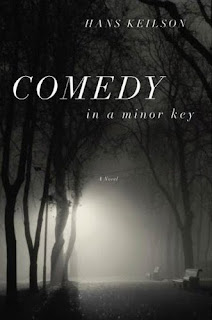