Book thirty-three: How to Live Safely in a Science Fictional Universe by Charles Yu. 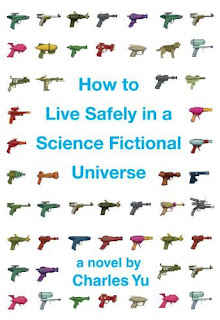 If you like your novels quirky with a big dose of existential melancholy, then get thee to a copy of Charles Yu's How to Live Safely in a Science Fictional Universe.  Don't ask me why I picked up this book because I'm not much of a science fiction fan. Although the goofy title is partially to blame. How can you not want to read something with that title?  I'm glad I read it.

This is a story of a of recreational time machine repairman.  Not just any recreational time machine repairman, but one that happens to be the son of the man who invented the time machine in is his garage.  The main character, Charles Yu (yes that's the same name as the author), spends much of his time in a tiny time machine traveling the decades with the help of his scroungy dog and his personified Microsoft operating system, Tammy. (Yes, at some time in the future, Microsoft makes its operating system available for time machines.)  Tammy is one of my favorite characters.  She's always a little depressed and maybe even suicidal, which leaves Charles wondering what happens if your time-machine operating system decides to end it all.  When Charles realizes he may be too distant from the present to get his machine back in time for needed repairs, Tammy wonders, "Is it my fault?"  When Charles replies that it's his fault Tammy asks hopefully, "Is it my fault that it's your fault?"

There are plenty of other delightful characters and stories in How to Live Safely in a Science Fictional Universe to make it a super fun read. I won't pretend to have understood all the mind-bending, time-traveling technology outlined in this book. But maybe I wasn't supposed to understand it.  I mean it is science fictional after all.

The bigger surprise is the book's more subversive, serious side .  It's that side of the book that is most rewarding.  How to Live Safely talks about time travel from a perspective of past tense, present tense, and future tense, giving it a literary bite that gets under your skin. At one point Charles puts his machine into present-indefinite gear which, "isn't even a real gear. It's like cruise control." It's through this lens of grammatical time that Yu asks the reader to ponder his or her own life.  Are we all stuck in a time loop?  Do we avoid our past because we don't want to think about something difficult? Are we too afraid of the future to really move forward?  Don't read this book if don't want to face some pretty big philosophical questions. Do read this book if you want the fun of a great science fiction story combined with the angst-filled philosophy of Kirkegaard.

I'll close with a passage from the book:

"How many times have I gone around this loop, refusing to move forward? How much of my life have I spent cycling through these events, trying to learn from them, attempting to decipher the meaning of this tableau in front of me. . .  What is this called, what I am doing, to myself, to my life, the wallowing, this pondering, this rolling over and over in the same places of my memory, wearing them thin, wearing them out? Why don't I ever learn? Why don't I do anything different?"
Posted by Jeff at 7:43 AM No comments:

Email ThisBlogThis!Share to TwitterShare to FacebookShare to Pinterest
Labels: Books, Charles Yu, How to Live Safely in a Science Fictional Universe 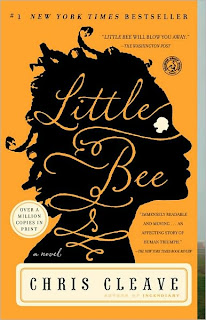 Told in first person from two points of view, Chris Cleave's Little Bee is the story of a young Nigerian refugee and her unlikely savior, Sarah.  The book is written well enough, although I sometimes grew tired of the chapters told from Little Bee's point of view.  The delight of the story is Sarah's son Charles (a.k.a. Batman, because he refuses to take off is Batman costume).  His antics give the story some much needed levity.

I have two observations  about  the book.  First, it's tragic.  Epically tragic.  Horrifically tragic.  In fact just when you think it can't get any more tragic, it gets more tragic. Some of that misery felt heavy handed and overworked.

But the tragedy leads me to my second observation: Maybe we need a little heavy-handed, hit-you-over-the-head-with-its-horror story telling when it comes to the travesties occurring in Nigeria and other areas of Africa.  I regularly read holocaust stories that are tragic. Epically tragic.  Horrifically tragic.  And somehow they don't seem as annoying.  Maybe that's because they happened in the past and I can soothe my conscience by thinking I would have done the right thing if I'd been alive at that time.  But I'm alive in a time when terrible things are happening to entire populations in Africa and around the globe.  And this book makes me wonder if I'm doing the right thing.  Do I even know what the right thing is?  Have I spent enough time to educate myself about the situation?  So while the tragedy of this book can be uncomfortable, it at least made me want to be more aware of difficult global situations so that if and when the opportunity arises, I might be more likely to do the right thing.
Posted by Jeff at 5:59 PM 1 comment: 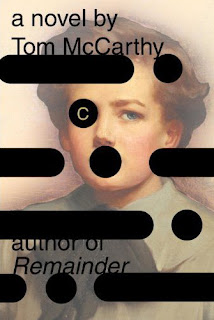 Tom McCarthy's novel C may be the best-written book I've read this year.  Is it the year's best book? I'm not sure.  But it's easily in the top three or four. And I'm having a hard time thinking of a book that is better written.  Maybe Tinkers.

The book follows the life of Serge Carrefax, from his unusual birth, through his service in World War One, to a drug fueled college career, and on to a return to government service with a stint in Egypt. I picked this book up because a reviewer I respect gave it high marks and called it "strenuously intellectual."  I took that as a reading challenged and expected a book that would be difficult, but hopefully rewarding.

For example, you can read C just for the stories.  I loved the opening section about Serge's childhood and growing up in a quirky British family.  We meet his father Mr. Simeon Carrefax, a brilliant character. He's a tinkerer of early wireless technologies who receives a delivery of copper wires in the same wagon that brings the doctor who delivers Serge.  Carrefax runs a school for deaf children that refuses to allow sign language. All this takes place at the quirky family estate known as Versoie.  This is such a wondrous, weird, funny place that I'm considering naming my house Versoie.  I might even take to insisting that friends refer to the front yard as the "Mulberry Lawn" and the back yard as the "Crypt Garden."  I could grow lime trees and keep bees.

You can also read this book on a literary level. C makes you wish for one of your favorite college literature professors to guide you through the themes.  The book crawls with insects that seem to invade the electrically charged story.  There's a Kafka-esque merger of bugs and technology and humanity.  This is a place where even the fireflies pulse "photically, in dots and dashes." This hints at another of the book's central themes: the buzzing, whirring, electrified technology that drives the character's lives.  C takes the early communications technology of the late 19th and early 20 Centuries and uses it to say something about now.  Maybe that's because we too find ourselves wrapped up in figuring out a whole new set of communications technologies.

One of the best reasons to read this book is the writing. Tom McCarthy is one talented writer.  C offers a dreamy, liquid style that might be pompous if it weren't so beautiful. Even though lush, the writing doesn't gets in the way of the story. Some passages are lyrical, almost poetic and themes emerge and re-emerge in subtle and delightful ways.

Sure, I'm still trying to process the book's fantastical, fever-induced hallucinogenic ending but even that is good reading.   So maybe I'll just wander out to the Crypt Garden, check in on the bees, and ponder it all.
Posted by Jeff at 7:47 AM No comments:

A Dia de los Muertos moment. (Or maybe my house is just haunted.) 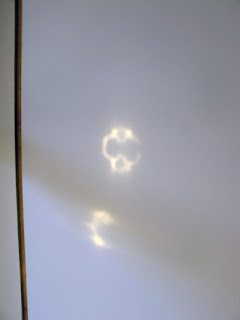 It's Dia de los Muertos (Day of the Dead) and I'm celebrating this Mexican tradition of honoring those who have gone before by posting a couple of photos.  Several times during the past few weeks a strange apparition has been found on my front door.  Is it just me or does that look suspiciously like a skull?
Maybe it's my ancestors giving me a sign that they've blessed my house.  Or, as my friend Felix suggests, maybe my house is haunted.  And according to Felix, if it is haunted, it has something to do with the front door.  How does he know?  Because when you leave a set of keys in the front door's dead bolt lock, they swing suspiciously for 10, 15, even 20 minutes with no additional physical encouragement. 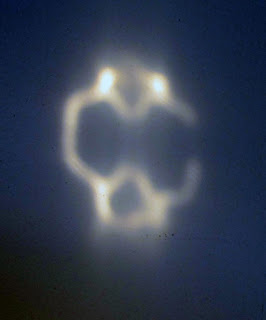 Then again, it could just be a cool play of light. I'll let you be the judge.  Whatever it is, I still appreciate all my ancestors have done for me.  Happy Dia de los Muertos.
Posted by Jeff at 6:06 AM 2 comments: