A poorly-informed trip to The Cloisters.

Museum-going is one of my favorite vacation activities as is evidenced by Art Lobster's many posts about museum visits.  So most people were shocked when I admitted that during all my visits to New York City, I had never been to The Cloisters, the satellite site of the Metropolitan Museum of Art.

My friends seemed to lord this fact over me, as if finally they had been to a museum I hadn't. People cooed about how relaxing and beautiful the setting is. And they pontificated about how interesting the collection is.

So on my last visit to New York, I made the trek that is about as far north you can go in Manhattan, hiked the somewhat confusing roads and park paths, and entered the imposing entrance to the Cloisters. I showed my Met membership card, entered the museum, and was immediately embarrassed by how ill prepared I was for this museum experience.

In my defense, there are legitimate reasons why I had never attended the museum and why I was ill informed. Medieval European art isn't something that I actively seek out.  I tend to gravitate to living artists or artists of the last 100 or so years. The Cloisters doesn't really do special exhibitions.  That's usually how I choose the museums I want to visit.  I look for an interesting temporary exhibit, make that a destination, and then find other things in that museum that look interesting.

So having done little research, I walked into the first gallery and was surprisingly confused.  What was I looking at?  Was this an old religious convent that the Met had converted into a museum? And how was I to judge the objects on display.  The confusion was enough that I immediately returned to the information counter to do the only thing that made sense.  Get some basic info and pay for an audio guide.

Turns out, The Cloisters was built specifically to house the Medieval European collection of the Met.  That's how they were able to incorporate many of the architectural elements right into the building. The Met's collection includes an impressive array of massive stone doorways, stained glass windows, and Cloisters, all of which have been thoughtfully built into the building.  Set among this are plenty of interesting art and objects.

The walls of one large room are covered with unicorn tapestries.  They are massive.  And while modern unicorns are usually rainbow-jumping cartoon characters, these animals were fierce creatures. Most of the tapestries involved hunting, trapping, or killing unicorns which was apparently a popular medieval activity.  The tapestries were spectacular.  And I can only imagine that they would have been all the more spectacular at a time when movies, videos, cartoons, immersive games, etc, did not exist. Not to mention the craftsmanship of the weaving.  I'm still not exactly sure how this was possible.  The work shown here is The Unicorn in Captivity (ca. 1495 - 1505, wool, silk, and silver and gilded silver-wrapped thread).


Medieval folk seem to thrill at the terrors of hell.  Gruesome images were to be found everywhere at The Cloisters. There was an entire collection of these small, stained-glass window medallions that featured truly awful scenes of hell.

Much of what makes The Cloisters impressive are the soaring architectural spaces which feel authentic to the Medieval sensibility the museum is  trying to recreate. 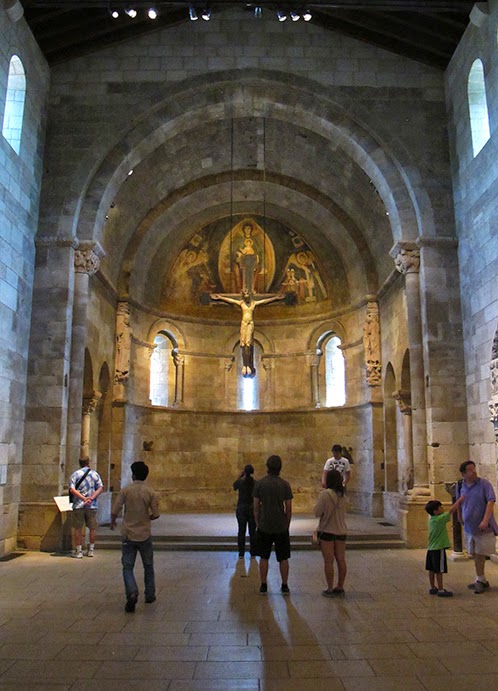 Medieval craftspeople were nothing if not focused on difficult-to-execute details.  Hand carved flourishes and figures can be found everywhere.  And I'm sure the tools used to create them didn't make the task easy.  Many of those featuring people suggest that Medieval life wasn't all that fun. 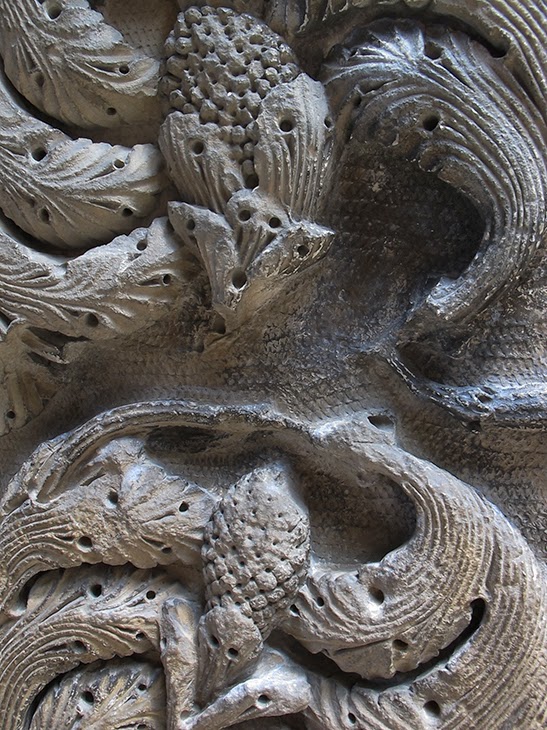 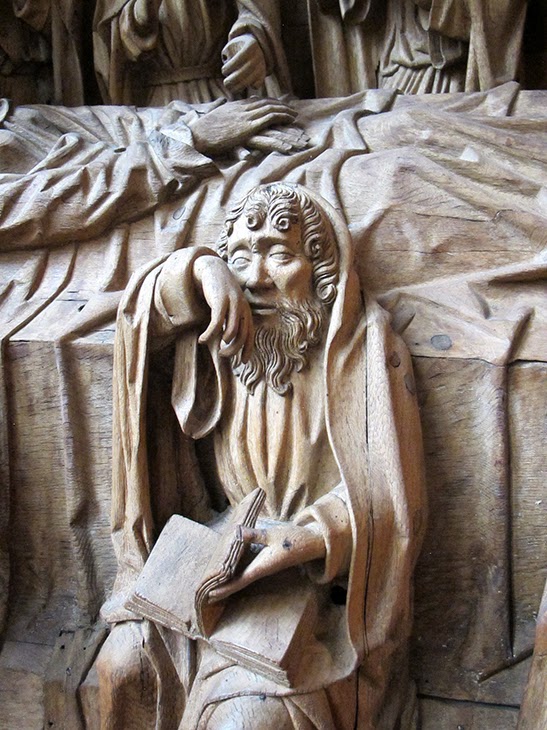 Of course there are the actual Cloisters which have been painstakingly reassembled from locations in Europe and elsewhere. A cloister is a covered walkway usually found in convents or monasteries. Most feature a wall on one side and a colonnade on the other that opens to a court yard. And yes, now I too can now coo about how relaxing and beautiful the setting of these spaces can be. Here's Felix taking a casual stroll through one such space. 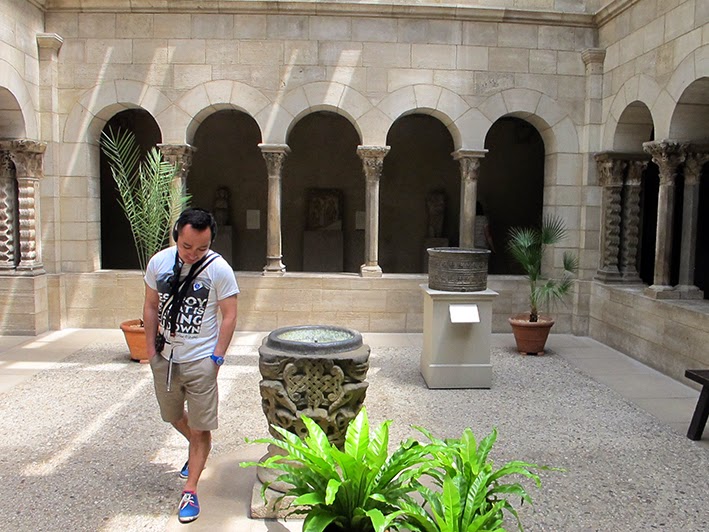 I'll admit I'm a little ambivalent about the intent of The Cloisters.  There were moments when it felt theme park-ish, as if the Disney imagineers had been called up and asked to create a Medieval European village.  At the same time, its quiet beauty and engaging content make for a lovely museum experience.

As last year 's year of reading books about art and artists continued, it got harder and harder to find books that looked like they were worth reading.  Sometimes you have to take a risk.  I did that with Christopher Moore’s Sacre Bleu.  I’ve read a Christopher Moore book once before and while it was not awful, it wasn’t my favorite read so I’ve stayed away from Moore’s hugely popular books ever since.
With that in mind, I’m pleased to report that Sacre Bleu was a pleasant surprise.  Reading this book was a reminder that books about art and artists tend to be serious, heavy, sometimes dark, frequently depressing, and so on.  So this light and frothy supernatural romp was a welcome change.
Here’s the premise: Maybe there’s a reason Van Gogh went crazy and cut off his ear.  And maybe his suicide (in which the artist shoots himself in the stomach and then walks a mile to a doctor for treatment) is just a little too suspect to not warrant investigation.

The book opens with news of Van Gogh’s death spreading through Paris.  Baker Lucien Lessard, whose father was an acquaintance of many of the great French Impressionist painters, receives the news and immediately feels the need to spread the word. Eventually Lucien is in cahoots with Henri Toulouse-Lautrec (with many other cameos from artists of the time) as they find themselves caught up in a mysterious tale.

Central to that tale is a twisted, shriveled character called the Colorman (who peddles artists’ paints like drugs) and the beautiful female muses who are associated with the paint maker.  As the book progresses, it takes on a dangerous, supernatural air with loads of surprises. It turns out, that for tens of thousands of years, a mysterious shade of sacre bleu is responsible for some of the world’s greatest paintings.  But the artists may have suffered the consequences.  In fact the color may have been responsible for some horrible moments in history.

Moore makes the French art world of the late 19th Century a delightful and exciting place where lust, liquor, and artists collide.  His take on historical characters is just plain fun.  Toulouse-Lautrec is one of the funniest characters I’ve read in a long time, even though the humor is frequently, dare I say it, off color, even blue. The adventure sequences crackle with suspense. The result a funny, pleasurable read about a subject matter that tends toward pomposity.