Big business in the Big Easy.

Thanks to the fact that my biggest client at work is Microsoft, I got to attend this year’s Worldwide Partner Conference (WPC) in New Orleans. This was my first trip to the Big Easy. And although I spent most of my time in a hyper-air-conditioned, mile-long conference center, I did take advantage of downtime to sample the cuisine, see the sights, and even visit a museum or two. WPC is big business for any city with nearly 10,000 people descending on New Orleans. I’ll dedicate the next several posts to my time in “the crescent city.”

An opening note: I probably shouldn't complain too much about the chilly temperatures in the convention center. New Orleans in July is downright steamy hot, with an emphasis on the steamy. So much so that I regularly stepped out of an air-conditioned building only to have my glasses fog—something that only happens during Utah winters. The humid heat was a new experience for me, but there was something about it I liked. It was almost literary. I expected to see dapper southern gentlemen enjoying iced tea in French Quarter cafes, fanning themselves with their hats as they contemplated the latest news. But most of all, it was a constant reminder that I was visiting someplace new—and why not enjoy that.

A second opening note: The New Orleanians like their booze. You can get a drink just about anywhere (stay tuned for more) and you can take that drink just about anywhere. That’s right. Go ahead. Wander the streets of New Orleans with a cocktail in hand. The locals won’t mind. It's a little shocking to witness when you're from Utah where we just recently got rid of our restrictive private club laws.


The view from my room at the W French Quarter 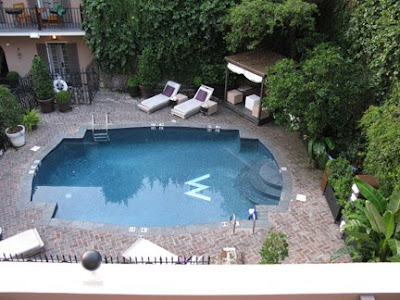