Boys will be Pet Shop Boys.

The official reason for my visit to Las Vegas? The Pet Shop Boys Pandemonium Tour live at The Joint in the Hard Rock Hotel. This is my third time to see The Boys and as always, they delivered. Let’s start with the staging. Imagine you’re hangin out with the Pet Shop Boys talking about what they might do to make their upcoming tour amazing. And you suggest, “How about if we build the entire set with cardboard boxes?” And everybody says, “That’s a great idea, let’s do it.”
That’s what I imagine happened for this show. Because guess what, virtually the entire set is made from large, white cardboard boxes. And it’s so cool, you’re well into the concert before figure out what’s going on. But then, when the initial wall of boxes comes crashing down to the stage (only to reveal an even bigger wall of white, cardboard boxes), and stage hands dressed in white hard hats and lab coats start reassembling the fallen boxes into an series of platforms, you realize this is no ordinary pop show.
Part of what makes the cardboard so cool is the projection technology. The boxes are transformed into constantly changing motion and color. The Pet Shop Boys like their multimedia and this show is a multimedia dream.
Of course none of this matters if the music isn’t any good. But with one of the most distinctive sounds in music, serious live performance skills, and a never ending supply of dancetastic hits, it's impossible not to get swept up in the magic of a Pet Shop Boys concert. And you haven’t experienced Euro pop until you’ve been part of the crowd when the Pet Shop Boys sing It’s a Sin. It’s the definition of crazy, fun gay irony.
One of the things I like best about Pet Shop Boys concerts is the crowd. I’ve been to a lot of concerts but I’ve never seen fans like Pet Shop Boys fans. These are people who grew up with Chris and Neil and many of them know every lyric to every song. And they’ll be happy to tell you where they were the first time they heard each song. They love the Pet Shop Boys' emotional, smart, intoxicating music and they love that it's a just whole lotta fun. I also like how easy it is to make new friends at a Pet Shop Boys concert. Everyone wants to be your friend.
Toward the end of the concert, the big box wall begins to fall. But in a moment that was more magical than anything Chris Angel put on stage, the boxes freeze and hang suspended in mid fall. The crowd goes wild and we can hardly wait to see what the Pet Shop Boys do next.
Here are few picture from the concert. Sorry for the blur but concert photos are tough. 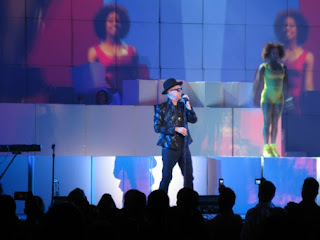 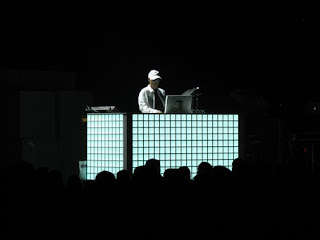 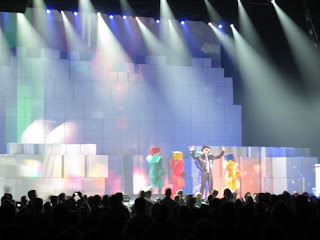 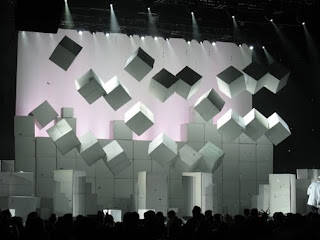 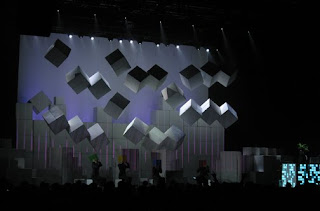 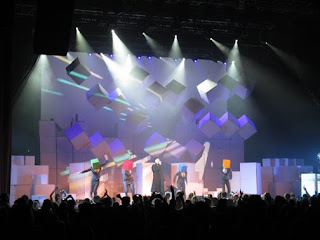