An art marathon at the Salt Lake Art Center.

For 48 hours this weekend you can view and even participate in a performance art piece created by Salt Lake City style maven and artist, Gary Vlasic.  The work is called Dark Horse/Fallen Shadows and is an homage to the dance marathons that were popular in the early part of the 20th Century. 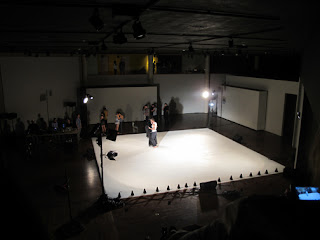 Art marathons are all the rage these days.  In fact, this performance reminded me of recent performances in New York City.  The idea of keeping a museum space open for 24 hours a day was reminiscent of Michael Asher's proposal for the recent Whitney Biennial which called for the museum to remain open 24 hours a day for seven days.  (Budget restrictions meant they were only able to do it for three).  And Dark Horse/Fallen Shadows is very reminiscent of Marina Abromovic's The Artist is Present, recently on view at MoMA.  The set ups for both are striking for their similarity, each with a defined square space lit with four large light stands, one in each corner.  There was also similarity in the desire of the artists to encourage interaction with the audience; Abromovic asking visitors to sit and stare at her every day for over two months; Vlasic inviting the audience to join the dance, even inviting them to dance with him.
I spent about two hours at Dark Horse/Fallen Shadows. The first hour was a more formal performance which was to take place Friday and Saturday nights at about 8:45.  The second hour was part of the marathon in which the professional dancers and museum goers are set loose to perform hour after hour.  There was a lot to like.  The choreography is ingenious with a mix of light, balletic movements that defy the demands of a 48-hour performance mixed with more angry and stern movements.  During the unstructured performance, the professional dancers could take individual choreographic lines and perform them at will, sometimes joined by another dancer, which gave the performance a dreamy air of reoccurring memory.
Adding to the dream-like quality was a line of metronome's set at different tempos and allowed to wind down at their own pace.  The constant tic of the time keepers created an iconic image that will be hard to forget. Plus, it was just cool. 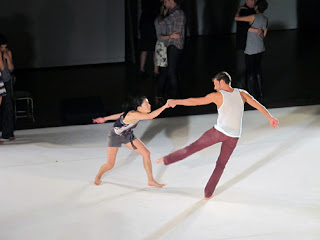 The dancers were good.  It was particularly fun to see Todd Allen who was responsible for the choreography and also performed as a dancer.  Allen was one Repertory Dance Theatre's best dancers but abandoned his Salt Lake City fans to dance in New York City.  For this performance he brought the physical dichotomies for which I remember him; a surprising ability to balance opposites like power and softness or ego and vulnerability.
Performance art is an unpleasant affair, at least if you judge from the facial expressions of its practitioners.  And Dark Horse/Fallen Shadows is no different.  You won't find any smiles in this performance.  It's all stern, somber faces that look pissed at the thought of having to carry on with these shenanigans for an endless 48 hours.  But why all the gloom.  There were moments that were charming, amusing, even silly.  And I wish that expression had shown itself in the performance.
In the program Vlasic notes, "I have always dreamed of the [Salt Lake Art Center] Main Gallery as a performing arena for my visual world and dreamscapes."  This prompted a wonderful memory.  Working nearly two decades ago for the Utah Symphony, we were planning a 50th anniversary celebration, one party of which was to be held at the Salt Lake Art Center.  We asked Vlasic to give us a proposal for the party.  And if my memory serves, Mr. Vlasic suggested an entire chorus line of tap dancers descending the Salt Lake Art Center's wooden staircase carrying flaming desserts.  Ultimately, the idea was deemed a little too flashy for the symphony crowd.  That wooden stair case is now gone, replaced with a cheap metal affair.  And there were no tap dancers.  But somehow, I felt like Gary Vlasic may have just achieved a dream, a grand spectacle that momentarily invades a beautiful space and our minds.
You can still experience Dark Horse/Fallen Shadows this weekend.  It ends Sunday, September 26 at 6:00 p.m.  Doors are open all day and all night.  Here are a few more photos: