Book six: The Days of Anna Madrigal by Armistead Maupin. 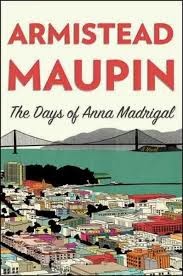 Say it isn't so, Armistead Maupin! You've threatened that past books in the Tales of the City series were the last.  But this time you seem serious. And (SPOILER ALERT) with Anna Madrigal's final transformation complete, it seems the story may have run its natural course. But it doesn't have to be the end.

I'm talking, of course about Armistead Maupin's most recent novel, The Days of Anna Madrigal, the purported last novel in the "Tales" series. I'm a long time Tales of the City fan.  I've read all of the books in the series at least once.  (Well, except for this last which I listened to the audio book, performed delightfully by Kate Mulgrew. But I intend to read it as well.) I just recently finished listening to all of the audio books, many of which were just released last year. I've watched both the BBC and the Showtime TV series multiple times. I'm one of a limited number of people to have seen the musical based on the first two novels. With all these experiences under my belt, I can honestly say The Days of Anna Madrigal is the best installment since Tales of the City and More Tales of the City.

The fact that this installment is so good makes sense. After all, Anna Madrigal really is the central character of the entire story. Sure, some might argue that either Mary Ann Singleton or Michael Tolliver are the central characters.  There's probably more of a case to be made for Michael since he plays a prominent role in all the books. But it's Mrs. Madrigal who is the catalyst of the story.  Mary Ann's abrupt decision to move to San Francisco is just like any other naive, midwestern woman moving to the big city.  It's only with the magical, mysterious ways of Anna Madrigal that the story becomes enchanting.

The Days of Anna Madrigal finds the grand dame in her 90s.  After suffering strokes she is more frail than in previous stories, but certainly no less timid. Her wise, witty, and surprising remarks are as enchanting and hard edged as ever. And her power as literature's greatest transgendered character has only strengthened.  It's amazing that Mr. Maupin created this character in the 70s, a time when cultural attitudes about the LGBT community were much more sinister than they are today. The book seems to recognize this fact and offers a touching tribute to the courage of Mrs. Madrigal.  It is also a tribute to Maupin's dedication to breaking through cultural boundaries well ahead of his time.

New to this volume in the Tales saga is the use of flashbacks.  The reader is regularly taken back to Anna's childhood when she was a he named Andy. This literary device is perfect for this installment. As I deal with aging parents, I'm fascinated at the way their youth becomes increasingly more prevalent and important. This book conveys an honest sentiment of aging in a modern world. It also provides insight into Anna's mysterious secrets.

While many elements of the book feel fresh and unexpected, The Days of Anna Madrigal still delivers on all those literary delights that you expect from Armistead Maupin. There's all that brilliant dialogue. There are plenty of short, delicious lines that end each chapter and drive you onto the next, making the book immensely readable. There are the crazy plot twists that are completely ridiculous but somehow totally believable. And then there are the adventures.  This time there are two delightful and emotional adventures.  First, a return trip for Anna to her hometown of Winnemucca, Nevada where some of the story's long-standing secrets are revealed.  The second is the ultimate Tales of the City reunion at Burning Man of all places. The result is a novel that is as charming, laugh-out-loud funny, and moving as any in the series.

But just in case Mr. Maupin is listening to this fan, I'd like to suggest that this doesn't have to be the last. There are plenty of stories I'd still like to here.  Take Jake and his new boyfriend.  We have to know what happens to them. And what about Shawna? Oh, and how about the new generation of transgendered characters?  Couldn't one of them take over the mantle left by Anna?  All I'm asking Armistead, is that you consider it.

Until then, you should definitely read The Days of Anna Madrigal.

Email ThisBlogThis!Share to TwitterShare to FacebookShare to Pinterest
Labels: Armistead Maupin, Audio Books, Books, Tales of the City, The Days of Anna Madrigal