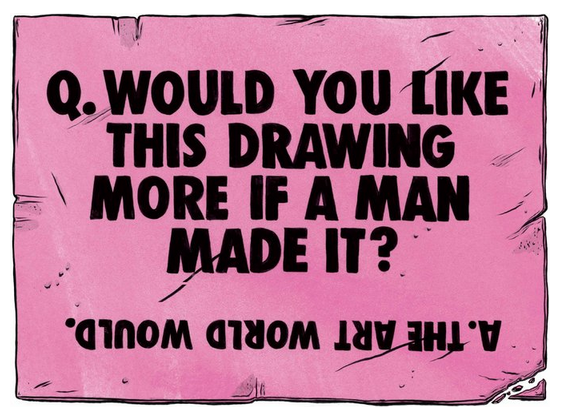 A while back I opened my Sunday New York Times and there was this interesting image on the cover of the Book Review. It looked like something you might see from feminist artists The Gorilla Girls or maybe even Barbra Kruger.  It asks the question, “Would you like this more if a man made it?”  I’ll start with the obvious comment.  It’s a little rich that the Book Review would have this question on its cover since the publication is notoriously bad when it comes to the equal treatment of men and women in its pages, featuring dramatically more male authors and reviewers than female.

Of course, since I’m in the middle of my year of reading books by and about art and artists, the graphic immediately caught my attention.  Because the question of how the art world treats women has always been of interest to me.  So I immediately downloaded The Blazing World by Siri Hustvedt.

The novel follows the career of Harriett (Harry) Burden.  She finds herself in a situation many women artists find themselves in: The largely male dominated art world ignores them. Tired of the situation, Harry embarks on a project she calls Maskings, in which she finds men willing to act as masks.  They present her work as their own. The result is a series of three successful shows over a number of years. 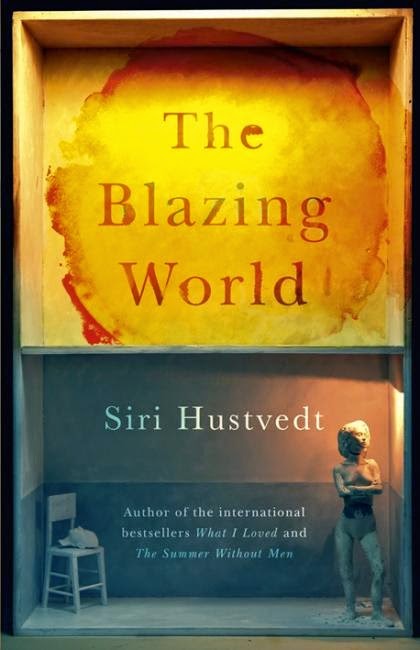 When Harry finally reveals the truth, the critics are doubtful, one of the artists denies it, and what was supposed to be Harry’s grand triumph becomes the source of immense depression, frustration, and anger.

This book is masterful in the way it discussed the gross inequalities of the art world, what makes art valuable, and how artists arrive at their vision.  That’s when I liked the book.  And Hustvedt makes some convincing arguments about the gulf between the value placed on art from women vs. men.  Take this passage as recalled by Harry’s grown daughter:

I offered the comment that this was changing, slowly perhaps but changing nevertheless; that more and more women were getting their due. I had just read something about it . . .

Harry's expression turned bitter. Even the most famous woman artist is a bargain compared to the most famous man—dirt cheap in comparison. Look at the divine Louise Bourgeois. What does that tell you? Harry’s voice cracked. Money talks. It tells you about what is valued, what matters. It sure as hell isn’t women.

That's a powerful bit of writing. I like The Blazing World best when it engaged in conversations about the value of art and of women’s roles in the art world.

I also liked that the book explored the duality of personality.  Often Hustvedt uses her characters to explore how our sexuality, personality, and gender are probably more fluid than most of us are willing to admit.

There were things I didn’t like about the book.  The novel uses a construct that is quite trendy in the world of recent literary novels.  Each chapter is told from a different perspective and with different writing styles. The premise is that the writer is actually a researcher trying to determine what really happened during the life of Harriett Burden.  The book uses Harry’s journals, interviews with acquaintances, and other transcripts to tell the story.  The result is that some sections (like Harry’s journals) make for great reading. Other sections just seem like interruptions to a better book.  Also, this book has footnotes.  And anyone who regularly reads my book posts knows that I’m baffled by the use of footnotes in novels.  They annoy me. It's a literary trend that I find infuriating.

But it would be unfair for me to end on the things that didn’t inspire me. Because this book is worth reading and explores feminism in an interesting and engaging way. The world can definitely use more conversations like this.