Christ, a French Impressionist, and Andy Warhol walk into an ice cream parlor.

Christ, Impressionists, and Warhol in the same room. I know it sounds crazy, but it is Happy Valley.

Yes, I recently trekked to Happy Valley. I haven’t been in that part of the world for a long while and had heard tell of wonders and amazements. OK, I went to see the gardens at Thanksgiving Point and while I was in the area, I thought a trip to the BYU Museum of Art might be fun. I’d seen a newspaper article on a current exhibit that had potential. Paths to Impressionism (on view through July 8) features primarily landscape paintings by French and American Impressionists including works by a number of prominent artists, the most famous of which is Claude Monet.

The show is like a mini art history course in Impressionism. Plus, how often will you get to see Monet water lilies in Utah. But the big surprise of the excursion was the other exhibits at the museum. They were good. In fact I enjoyed them more than the Impressionists.

Beholding Salvation: Images of Christ is on display through June 16. OK, I’ll admit it. When I heard BYU was hosting an art show about Christ I assumed it was going to be, how shall I put this, “special.” But the show is interesting.

A diverse collection of art is represented, from the 15th century to the present. Take for example an early wooden sculpture titled Dead Christ. It is somehow contemplative and creepy all at the same time. Kudos to the curators for the beautiful presentation. Even much of the contemporary religious art (which I often find condescending and cheap) is interesting.

And that isn’t all. Possibly even more impressionistic than the Impressionist paintings are the 19th century photographic landscapes of William B. Post. I had never heard of this artist or seen any of his photographs. But I like them. A lot. The platinum prints offer dreamy images that are lovely and inviting and melancholy. Seriously, if you’re at all interested in photography, this show is worth the trip to Provo.

But wait, there’s more. American Dreams: Selected Works from the Museum’s Permanent Collection of American Art is on display through 2011. So you have a while to get down to BYU before this closes. That means no “I just didn’t have time to go” excuses. The exhibit takes up a full four of the museum’s galleries and is spread out over two floors.

For you pop art fans you can see not one, but two versions of Andy Warhol’s hyper-popular Marylin Monroe prints. And the exhibit is a veritable Maynard Dixon study guide with nearly a half dozen of the artist’s work on display. Dixon’s landscapes are expected but the intrigue of his paintings of people is surprising.

Robert Indiana’s super-sized, flower-power-fueled, 60s-inspired LOVE sculpture is on display alongside a woven mat designed by Alexander Calder. Both make great big statements and ask questions about the line between art and just stuff. In fact they may out-Warhol the Warhol works. 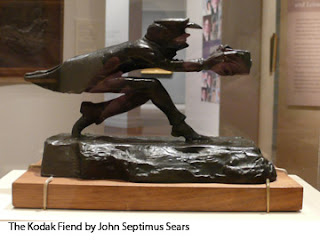 Less expected works are also worth some attention. I really liked The Kodak Fiend, a small bronze by cartoonist John Septimus Sears. The sculpture’s satirical take on amateur photographers seems almost more telling in today’s digitally-fueled, camera crazed world than in the early days of the Kodak.

Sure there are a plenty of mundane works in American Dreams but there is also a whole lotta good stuff. I may even go back for a second look. After all, I have until 2011 to get there.
Now at the BYU Museum of Art:

The Quiet Landscapes of William B. Post. Through May 28.
Beholding Salvation: Images of Christ. Through June 16.
Paths to Impressionism. Through July 8.
American Dreams: Selected Works from the Museum’s Permanent Collection of American Art. Through 2011.
Posted by Jeff at 10:37 AM