I wanna be a genius—or maybe just a little crazy.

I know a guy who is a painter. He’s not a professional painter but he paints. He used to paint the occasional scene, a canvas here and there; but not long ago he started painting obsessively. He painted multiple portraits of the same person in hopes of capturing some intangible. He saw a woman in a park and snapped clandestine photographs of her so later he could paint her over and over and over and over. The walls of his house are now covered with unsold canvases. No one buys his paintings but he continues to paint. Relentlessly. Obsessively.

I’m intrigued by this devotion to creating. I can’t decide if it's the spark of genius or if it’s someone who’s gone a bit crazy. 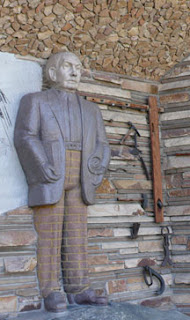 Recently, in a strange park, I contemplated the questions of genius vs. insanity. Gilgal Garden is near downtown Salt Lake City and features sculptures by Thomas Child. The sculptures were an attempt by Child to give physical form to his religious convictions. Included in the gardens are 12 sculptural arrangements and over 70 stones engraved with scriptures, poems, and philosophical texts.

Work on the gardens began in 1945 when Child was already 57. The sculptures consumed much of the artist’s time and money until his death in 1963. Many of the stones in the sculpture garden are monolithic (weighing up to 62 tons) and were gathered from Utah mountainsides and streambeds. Heavy machinery and herculean efforts were often required to get the rocks to their current resting places.

The result of all this effort is strange. From the sphinx with the head of Joseph Smith to the artist’s self portrait paying homage to the masonry trade, Gilgal Garden is a weird stew of styles and ideas. I wouldn’t categorize the work as genius. In fact, I’d argue that the sculptures are just OK. But there may be genius in the creative effort. Or maybe, Thomas Child was just a little crazy; a man who didn’t know when to stop; a man who couldn’t stop until he expressed something. Either way, Child left behind something engaging, even mesmerizing.

Maybe someday I’ll be struck with such obsession, be it genius or otherwise.