With the arrival of fall, it’s not just school that’s back in season. The local arts groups are back at it. And that means preseason performances that get us ready for the official start of the performing arts season. So here are two quick reviews of early dance performances.
Momentum Elevated
This is the Ririe-Woodbury alumni performance bringing several past dancers back for works choreographed by many of the dancers. This year’s show left me a little cold. It felt more like a school dance recital than a professional contemporary dance performance. One big reason? The casting. There were 20 female dancers (many of whom were students) with only three male performers. That’s a ratio you usually find at a high school dance recital, where real men don’t dance.
But I’ll focus on the positive. Like two works by current Ririe-Woodbury dancer Caine Keenan. He’s the dancer I love to hate. I’ve been watching him for years and he always comes across as a snob. So I could hardly wait to tear his works apart. But damn you Cain Keenan, you’re work was some of the best on the program. His self-choreographed solo Elre was athletic, beautiful, and surprisingly humble. And Act 4, Scene 7 Line 180 featuring “six fierce Ophelias” demonstrated a surprisingly mature perspective.
The other pleasant performances came courtesy of Jill Voorhees Edwards. She choreographed and performed two works. Les Filles started with Jill facing away from the audience back muscles (beautifully lit) were a character in themselves. And Shed performed by Jill and Jillian Harris was brilliant.
An open rehearsal from Ririe-Woodbury. 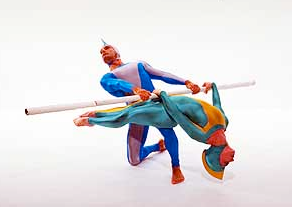 A more exciting preview performance was a recent open rehearsal for Ririe-Woodbury’s reconstruction of Alwin Nikolais’s Kaleidoscope Suite. I’m a longtime Nikolais fan, mainly because Ririe-Woodbury is something of an official repository of Nikolais choreography. This is the 14th Nikolais work to be set on the company. You’d be hard pressed to find many other companies in the world that know so much Nikolais choreography.
Kaleidoscope was choreographed in 1956. And as is the case with most of Alwin’s works, it is surprisingly current. The evening featured four segments from the full work.
The excerpts featured the expected props, lighting, original music, and costumes that you expect from Alwin Nikolais. But what surprised me more were the themes that now seem so evident. Themes that explore tension and balance. Take the opening excerpt performed almost entirely on one leg. I’m still not sure how the dancers did it. Or the beautiful male trio featuring dancers constrained by elastic bands, reminiscent of Tensile Involvement.
The fourth excerpt lampooned the fashion industry, a devious demonstration of the futility of trying to keep up with current trends.
Unfortunately, we won’t get to see the full-length work any time soon. That’s because the work will premiere in New York City in May of Next year as part of the international Alwin Nikolais Centennial Celebration. But I suppose that’s to be expected. I’m always surprised at how popular Ririe-Woodbury is in the rest of the world. Their shows sell out in cities everywhere, from New York to Paris. But there are always plenty of seats here in Salt Lake City. Let’s hope we’ll get to see the full Kaleidoscope performance during the 2009-10 season.
Posted by Jeff at 9:34 PM