Things I missed at this year's Sundance Film Festival.

Sundance is always fun.  But this year, there were a few things missing.  Here are a few things  I hope will return next year:
Documentaries. Ok, these weren't actually missing from Sundance.  It's just that my schedule didn't allow me to see as many documentaries as I normally see.  And I missed it. I know everyone says the docs are the best films at Sundance, but this year I realized that cliche is based on truth.  Next year I hope to return to the documentary.
The crazy crowds. I'm blaming it on the economy, but there were very few sold-out screenings in Salt Lake City this year.  Of course those two-hour wait-list rules don't help any. Can't we come up with a better solution. Maybe it's just me, but a Sundance screening is always better when every last seat is filled with an enthusiastic film fan.
Directors and cast members. This might also have something to do with the economy but there were far fewer screenings where directors and cast members showed up for the Q and A sessions.  Next  year, I hope the festival does more to encourage filmmakers and actors to come to Salt Lake City. We love having you here.
And finally, Cat Woman. For as long as I can remember, Julie Newmar, the iconic actress who played Cat Woman on the original Batman TV series has shown up at Sundance in Salt Lake City.  This year, I didn't see her once.  Ms. Newmar, I missed you.  I missed your glamorous attire.  I missed your perfectly coiffed hair.  And I missed your absolute disdain for those pesky Sundance volunteers. (I was once a Sundance volunteer who proudly endured the disdain of Cat Woman.) Julie Newmar, please come back.

Here's a photo of Julie Newmar I snapped at the 2009 Sundance Film Festival. 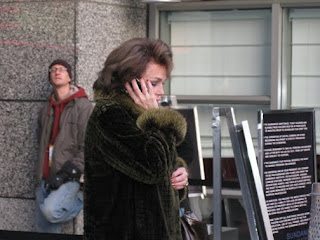