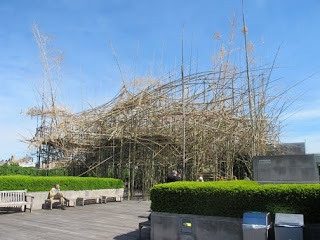 Here's one thing I love about New York City. This place isn't afraid to embrace crazy in the name of art.  Remember Christo and Jeanne-Claude's The Gates which transformed Central Park into a tunnel of orange banners. Or how about Olafur Eliasson's massive Waterfalls that appeared in 2008 in the East River.


And now, there's Big Bambu: You Can't, You Won't, and You Don't Stop on the roof of the Metropolitan Museum of Art.  Other organizations in other cities would say, "You wanna what!?!"  But  in the Big Apple, people say, "Sure, it's art. Let's give it a try."


Big Bambu is the brainchild of identical-twin brothers Doug and Mike Starn.  Here's the idea: Hire a bunch of rock climbers to build a giant bamboo wave high above the Met.  That wave will have bamboo pathways so people can walk up into the structure.  I'm still not sure how the curator at the Met got people to go along with this idea because it sounds totally crazy to me. And it obviously sounds crazy to the lawyers.  Because if you choose to take the guided tour, and if you meet all of the requirements (no kids and pregnant women are discouraged), you have to sign your life away to ensure that the museum, the artists, or any of the sponsors aren't liable should you fall to a tragic death from the roof of the Met. (There's a page-turner of a novel in there somewhere.)


It's worth the risk. Because walking the bamboo pathways is a little bit scary, a little bit magical, and a whole lot of fine-art fun.  And the best part; they're still building.  That's right, the rock climbers were hard at work building a second pathway.  The first rises 30 feet above the roof of the Met. The pathway in phase two will go 20 feet higher.  It should be done sometime in July so that might be a better time to visit.

Big Bambu speaks to the environment and the role we play in it.  It also asks visitors to reconsider the traditional ideas of architecture and it's relationship to our surroundings.  But more than anything it gave me a sense of what it means to be alive even in the contemplation of death.  Not just because you can't help wondering what might happen if the whole structure were to fail, but also because you're faced with the material itself.  While the fresh cut bamboo is rapidly changing from a living green to dead brown, the dieing bamboo is the basis for a structure that feels completely alive.

You can't take photos inside the structure because the museum and its lawyers are worried about people dropping things on the crowds below.  They even make take off your little metal Met entrance tags because some of those have been blown off of people by the wind. (Wind has to make this sculpture even more thrilling or terrifying depending on your point of view.) So you have to leave all your personal belongings in lockers.  But you can take pictures from below.  Here are a few additional photos.


Here you can see people on the guided tour resting in one of the lower walkways. 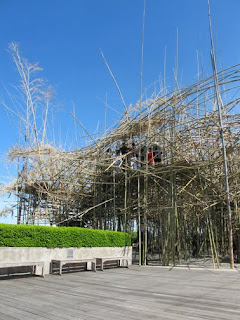 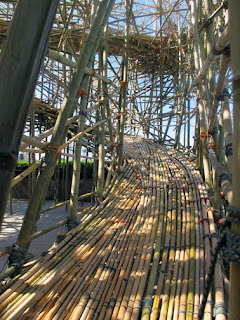 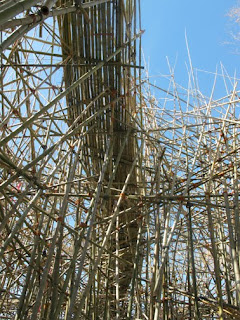 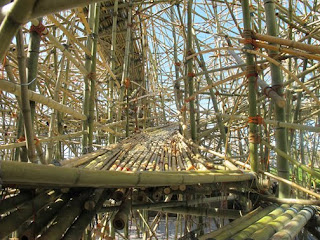 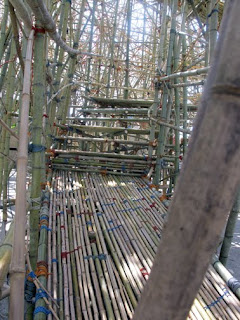 The entire sculpture is held together with brightly colored climbing rope which makes everything more interesting and strangely organic. 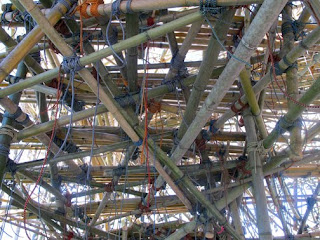 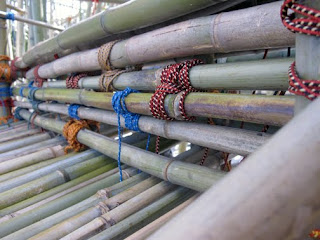 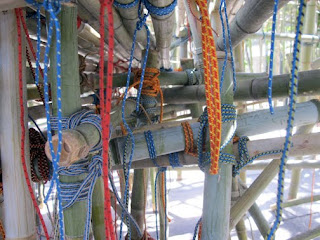 Here we are wandering underneath the structure. 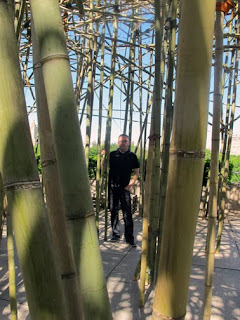 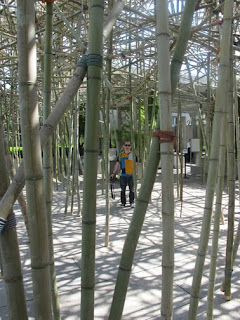 And finally, it's tough to beat the view of New York from the roof of the Metropolitan Museum of Art on a perfect spring day. 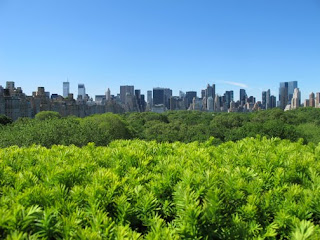 Big Bambu runs through October 31, 2010.  But if you plan to visit, be sure you know all the rules and what's required to take the guided tour.  It's totally worth the extra effort.  You can find on the necessary information here.
Posted by Jeff at 4:46 PM