New York's Museum of Arts and Design is at it again with a show that oozes craftsmanship.  And I'm a sucker for craftsmanship. My first trip to MAD was for an amazing show of works created from paper.  This trip, I went to see Dead or Alive, an exhibit that features art made from materials produced by or part of living organisms.
This is a show that one moment raises the hair on the back of your neck, the next moment inspires a magical sense of awe, and at another moment catches your breath and holds it just a little longer than is comfortable.  And all that's done with a first rate roster of fine artists and designers.  One of MAD's strong points is its ability to show that art can often be found outside traditional museums or galleries.
So let's chat about a few of the highlights from Dead or Alive. (I apologize for the poor photo quality but you're not allowed to take photographs at MAD which means I had to find photos wherever I could get them.)
When you exit the elevator on the fifth floor of the museum, you're greeted by a chandelier by Ango Design titled Eight Thousand Miles of Home (2010, silk cocoon, soldered steel wire.)  This work features approximately 12,000 silkworm cocoons which translates to about 8,000 miles of silk fiber. 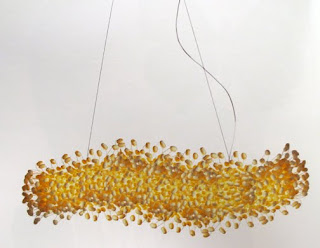 I loved Xu Bing's Background Story 6 (2010, wood and tempered glass, light box, natural debris).  This is a copy a traditional Chines landscape painting.  When I first saw the work, I thought it was a projection on the wall.  On closer inspection I realized it's lit from behind.  And when I walked around the back, in a moment of shear amazement, I realized that the subtle drawing is created from natural debris that has been carefully crafted to create shadows that form the lines and shading of the final work.  Note: this photo is not of the piece at MAD but it is a similar work from the same series.  The second photo is the actual "behind the scenes" view at MAD. 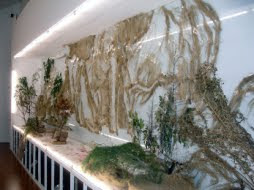 I've seen a number of Damien Hirst's butterfly paintings which embed butterflies in wet paint on canvases.  But most of them left me less than impressed.  That changed with Prophecy (2008, butterflies, household gloss on canvas).  This is beautiful.  Its stained-glass effect is mesmerizing and the gold leafed frame only adds to the effect.  Damien Hirst is really good about creating art that brings life and death, well, to life. 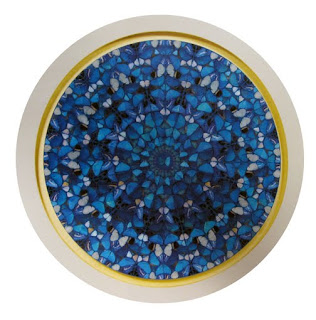 Talk about craftsmanship. Studio Drift offered up Fragile Future (2009, phosphorous bronze and dandelion puffs).  This show stopping light fixture/sculpture consists of a cubist, bronze grid sprinkled with LEDs.  Individual dandelion seeds are painstaking glued to each of the LEDs, recreating dandelion puffs lit from within.  I think this might be some sort of crazy, art-world voodoo magic. 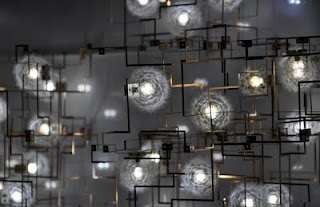 If you're looking for art for your big gay Wyoming ranch house, have I got something for you.  Mark Swanson's Untitled, (Antler Pile) (2010, antlers, crystals, adhesive) is so perfectly executed that most of the museum goers around couldn't help but voice their approval out loud. Believe me, this photo can't possibly do the sculpture justice.  Brilliant! Literally brilliant! 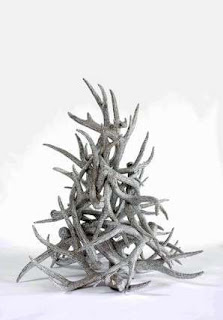 For a fan of the art world's fascination with skulls like me, Helen Altman's Spice Skulls (2009-10, 49 spices, wire, glue, j-hooks) is delicious.  Not only did I love this sculpture, I loved the story behind the sculptures.  Altman began by molding skulls out of bird seed.  Then hanging the skulls out and letting the birds pick away at them.  Much of the seed would fall to the ground and sprout, creating life from a strange symbol of death. 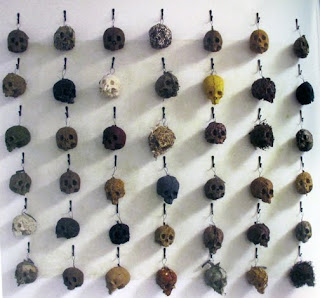 There's plenty more to see at this show.  In fact, I've only listed about half the works I wrote about in my art notebook.  And I only made notes about fewer than half the works in the show.
Dead or Alive is one of the best shows I saw on my recent trip to New York.  It runs through October 24.
Posted by Jeff at 8:26 PM