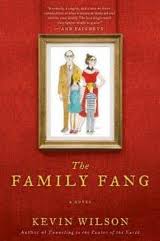 Oh those crazy performance artists.  I've often suggested that Art is best when it's about "the object" and that the fleeting nature of Performance Art (not to mention the general bizarre-ness of the whole affair) somehow makes the genre feel less permanent, less like Art for the ages.  And what good is Art if it can't stand the test of time.

But lately, I've had to rethink my ideas due to the amount of attention being lavished on Performance Art and because of some major museum retrospectives like MoMA's surprising show, The Artist Is Present featuring the works of Marina Abramovic.

Maybe that's why Kevin Wilson's The Family Fang seems somehow relevant in the current Art-world zeitgeist.  This is the story of Caleb and Camille Fang, a married couple who double as performance artists.  Much of their work involves setting up public situations that involve their two children, Annie and Buster (frequently referred to in their parents work as Child A and Child B).  And while the parents call it Art, "Their children called it mischief."

Much of the fun of this book is packed into the descriptions of Caleb and Camille's past successful performance pieces.   There's the time when the parents taught their musically illiterate children the worst street performance song ever, put them on the street, and made them perform under the guise that they needed to raise money to save their dying pet.  Caleb waits in the crowd heckling the children, calling them awful.  Soon the crowd is riled us, some agreeing with Caleb, others taking pity on the poor kids.

There's the family vacation to Florida, where Caleb (using a false name) publicly proposes to Camille (also using a false name) on the flight.  Camille says yes as the entire plane erupts in to cheers ushering in a sunshine filled, happy week of relaxation for A and B.  The happy vacation crashes to a halt on the flight back as Caleb repeats his mile-high proposal.  Only this time Camille says no, an argument ensues, making everyone on the plane, including A and B hopelessly uncomfortable.

With it's inventive wit, art-world weirdness, page-turning plot complete with an ultimate performance-art twist, I can easily recommend Kevin Wilson's The Family Fang.