A tale of two timed tickets.

This post is about three months late.  But both of these art world events are worth remembering.

Art museums are on a quest to surprise and delight visitors with blockbuster shows by some of the art world’s best stars.  But they’re also delivering on this quest with art that is experiential.  In particular, sculpture is often given over to interactions with viewers.  It makes for extra fun and inspiring trips to museums, but it also creates some problems.  Busy museums like the crowd appeal of interactive sculptures and installations. But with the massive crowds, it can be difficult for museums to give attendees a safe and meaningful experience  That’s where the timed ticket comes in.  These tickets are usually free with museum admission, but they limit the number of people who can participate in the artwork, making the experience more inspiring.

On my last trip to New York, I experienced two timed-ticket events: The first was Tomas Saraceno’s Cloud City on the roof of the Metropolitan Museum of Art; the second was Yayoi Kusama’s Fireflies on the Water at the Whitney Museum of Art.  Normally I’d write a separate post for art events this big.  But even though these two projects are wildly different, I felt they explored similar themes and ideas.  I thought it might be interesting to look at the two works in a single post.

Let’s start with Saraceno’s Cloud City.  For several years now I’ve seen photos of Saraceno’s amazing works with their giant clear bubbles that people climb onto and into and I dreamed of experiencing one of his installations.  So when I learned that Saraceno was chosen as the artist to appear on the roof of the Met this summer I was very excited.  Part of my enthusiasm stemmed from the fact that this is the Argentinian artist’s first major commission in the United States.

Cloud City is the largest and most ambitious structure in a series of works called Cloud Cities/Airport City. The work on the roof of the Met is a "constellation of sixteen interconnected multipolygonal modules linked in a nonlinear configuration.”  That’s a description that probably suits an artist who was originally trained as an architect.  It certainly doesn't accurately represent the art.  Cloud City is a three dimensional, human-sized bee hive of Plexiglas and mirror-finished steel. From the outside it forces you to see your environment even as it asks you to focus solely on the work of art. Each time you try to focus on the sculpture, you’re given reflected views and vistas of the world that surrounds you.  From the inside it’s a world of fun-house mirrors that force you to confront images of yourself, almost to infinity; a surprisingly contemplative work.  The curators at the Met suggest this work is an “investigation of how to expand the ways in which we inhabit and experience our environment.”  I loved it.  Here are a few photos. (By the way, no cameras are allowed inside the structure.  It helps to have a friend on the ground taking picture while you're inside.) 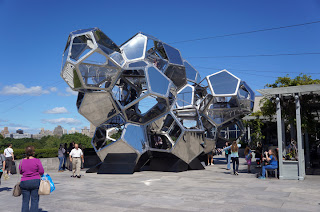 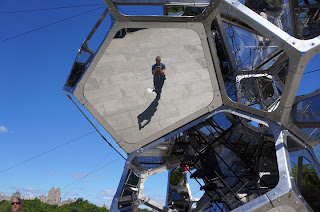 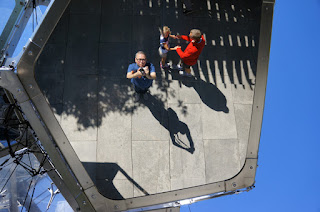 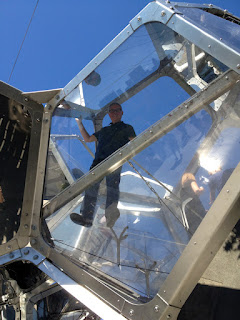 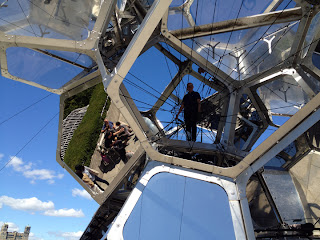 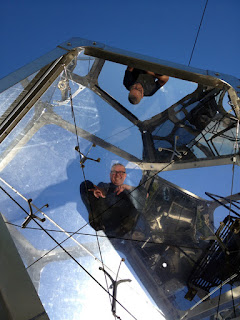 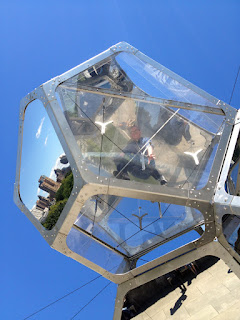 At the Whitney, Yayoi Kusama's Fireflies on the Water was a much different experience.  For this work, you wait patiently in a white gallery for 10 to 15 minutes.  When your turn arrives, a gallery attendant opens a door in the wall of the gallery, let's you into the sculpture, and starts a stopwatch, giving you 60 seconds inside.   During that minute, you're enclosed in a dark, mirrored room.  You walk out on a small gangplank to stand on a tiny platform in the middle of the room.  You're surrounded by still water.  Tiny LED lights are suspended from the ceiling.  The mirrored walls of the room (including the ceiling) create an infinite space that expands the perception of not just space, but also time.  It's a call to contemplation; a moment to ponder not just our place in the present, but our place in the universe.

No photos were allowed inside Fireflies on the Water.  So instead, I offer a portrait of Kusama inside the work of art. And just for fun, I'm also posting a photo I took of a Louis Vuitton window display in Tokyo.  Louis Vuitton created a line of products designed by Kusama at about the same time her show debuted at the Whitney.  I saw several window displays for the products, but only at this Tokyo store did the strange visage of Kusama that is seen in the portrait make another appearance. 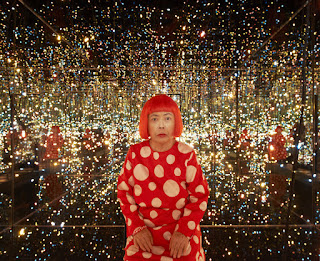 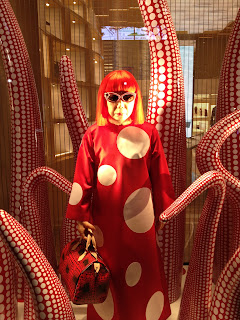