A science fiction writer, a librarian, and Google walk into a bar. 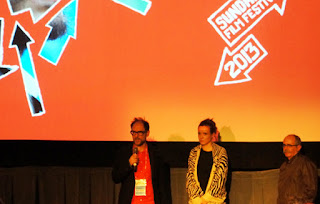 Director Ben Lewis introduced his documentary film Google and the World Brain by warning audiences that if they expected to see a documentary about Google, they might be disappointed  Instead, he suggested, the movie might be more about libraries and science fiction.  I'd say the movie is about Google.  But I was surprised at how much libraries and the ideas of H. G. Wells factored into the film.

This movie tracks Google's monumental efforts to digitize the world's great library collections.  Lewis makes a valiant effort to be fair.  But in the end, the storyline seems to demonize Google. Don't get me wrong, Google should be taken to task for its disregard of copyright laws.  But I'm not sure this story is as scandalous as the filmmakers want it to be.  And maybe I'm just a sensitive American, but this movie was definitely down on the American corporation, although in a surprisingly charming way.  My favorite character? The director of France's national library, whose French, anti-American snobbery was such a delight that I could have watched an entire movie just about him.

Even if I might take some issues with the intent of the movie, I can't complain about Lewis's craftsmanship as a filmmaker.  The library shots in this film are stunning.  And there's a Spanish server room that is so beautiful, it's hard to believe it's real.  As someone who's traveled the world to photograph data centers for Intel, I'd love to take photographs in that place.

That leads me to  my final comment: It's surprising how similar libraries and data centers are. With their rows and rows of stacks/racks that store the world's knowledge, I can't believe I haven't previously noticed the visual and philosophical similarities.  This movie gave me a new found appreciation for the beauty of both.