A walk through a Fallen City. 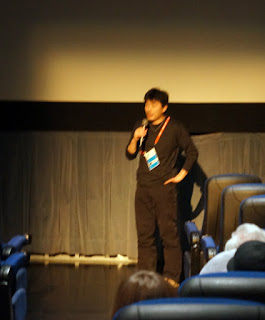 Qi Zhao seemed truly surprised that so many people showed up late on a Friday night to see his solemn documentary Fallen City. That's one of the joys of Sundance; watching filmmakers respond to the enthusiastic crowds in Salt Lake City. His hope is that as many people in China will get to see the film.  He didn't seem particularly confident that would happen.

Fallen City is exactly the type of movie that belongs at Sundance. It tells the story of three families who survived the 2008 earthquake in China.  The film feels almost epic with its meticulous coverage of four years of these family's lives.  The movie also has a lyrical quality that makes the devastation of the earthquake beautiful.  I loved the portraits of the families which were startling for their honesty.

Those accomplishments don't mean the movie is perfect.  There are multiple moments when the stories of the families lose their focus and film stalls.  In those moments, the movie slows to a crawl.

Fallen City is also a story about Chinese politics, both the good and the bad. As an American, this movie is baffling as you try to understand the way the Chinese government works.  There's criticism of China's leadership which is warranted.  But I have to say, the fact that the Chinese government can build an entire city in two years makes our dysfunctional government seem even more ridiculous.  Even so, I'll take American dysfunction over the options offered in this film any day.

Have you ever had this experience? You're watching a Sundance film and you're sure there's a hidden, deeper meaning or cinematic theme, but you can't figure out what it is.  This movie offers that experience.  There are a lot of insects featured prominently in Fallen City.There are praying mantises,   bees, spiders, aphids, even butterflies. There are enough insect so precisely filmed that I'm sure they're supposed represent a metaphor, or some cinematic homage.  But I can't figure out what that might be.  So if any of you movie savants out there have figured it out, I'd love to hear your thoughts.

I'm not sure Fallen City will be seen by many people outside the film-festival circuit. So I applaud Sundance for doing what they do best; giving voice to important stories that otherwise might not see the light of day.