The art of never giving up. 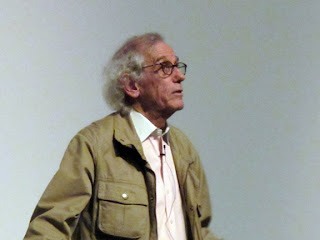 The first thing you notice about Christo is his dedication to his ideas. Even at 76 years old, his enthusiasm for what he does is contagious. For all of you who question the reason of unleashing several thousand giant umbrellas in California and Japan for a mere two weeks. Or of skirting entire islands with millions of square feet of pink fabric, also for just a few weeks, don’t expect Christo to defend his work from the standpoint of logic, or societal value, or even academics. Christo readily admits that no one needs his work. No one will notice if the Reichstag in Berlin doesn’t get wrapped with fabric and ropes. And will anyone care if Christo doesn’t erect 7,000+ orange gates along the pathways of Central Park? And Christo doesn't really care.  We learned all of this at his recent visit to Salt Lake City where he lectured at Kingsbury Hall on the University of Utah campus.
So why do all these crazy things? Christo’s answer to this question was one of the most refreshing I’ve heard in a long time: beauty. These days most artists are making statements or challenging the status quo or destroying the traditions of Western art. And while Christo may be doing all those things, he’s doing them not because of some grand ideology, but rather for beauty. As he put it, “The absolute expression of poetry.”  I can't think of a better defense for art. 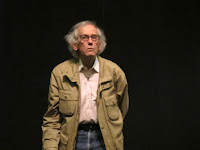 There were a lot of things to like about Christo. First is his unwillingness to pander to the art and academic world. I think that might stem from his method of funding his projects. Christo and his long-time wife and collaborator, Jeanne-Claude (who died in November) do not have a gallery, do not work with a dealer. They accept no donations and take no money from grants or public arts projects. Instead they sell original artwork (including preliminary drawings and paintings for future projects) directly to collectors and institutions. That money is used to fund their massive projects; projects which can cost tens of millions of dollars. Consider this, the environmental impact statement for their planned, upcoming work, Over the River, cost over a million dollars.
Christo and Jean Claude are also patient. It took 26 years to finally get the necessary permissions for The Gates. Over the River, a work which covers nearly 50 miles of the Arkansas river in Colorado with a ceiling of shimmering blue fabric, has been in the works for 19 years. That kind of dedication is fascinating from an artistic stanpoint.  Installations that last only two weeks, yet take decades to create are a reversal of the normal artistic processes.
Christo's take on the realities of getting permissions to create his works is also interesting. The process of navigating beaurocratic red tape is part of his artistry and may be one reason his art matters; a statement on how impossible it’s become to get anything done. Unless you have the dedication and determination to pursue a goal for decades, you may never make it through the beaaruacracy.  We need politicians that are this dedicated to getting inspiring things done.
A few other things I liked about the lecture: 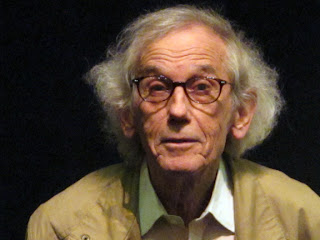 Christo is foremost an artist, not an educator. OK, Christo might not agree with this statement exactly but hear me out. Lately it seems you can’t approach anything “Art” without being bombarded with arts education. Whether it’s performance or visual arts, artists are now forced to be educators first and artists second. Christo takes art as his priority. This was most evident when a woman stepped to the microphone to talk about using Christo’s work as part of her elementary school curriculum. She asked her students to write essays about what would happen if Christo were to wrap the White House. She brought those essays to give to the artist. He refused to accept them saying the best way to kill an idea is to suggest it to Christo. All of his ideas are original.
Also, love matters. Listening to Christo talk about Jeanne-Claude, his late wife and artistic partner was inspiring. He admitted that several of their works were ideas that Jeanne-Claude had originated and said that they worked together only because of love. "Our life is a work of art." I'm not generally sentimental, but that makes me want to be.

When asked why his works were installed for such short periods of time (usually just a few weeks), he offered a profound statement on the timliness of life.  "The work can't last. Like our childhood, like our lives, this is something that can never happen again."  I don't think I've ever heard an artist say, "The work can't last."
Christo’s lecture was inspiring. I’m rededicating myself to creating beauty simply because beauty matters. I’m also rededicating myself to not being afraid of doing things just because they seem too difficult. Sure, I may not have any 26-year projects up my sleeve. But writing off ideas because they might eat up a month or two of my life is a cop out. And now if Over the River gets approval in the next few months (as it looks like it might), and if it gets installed in the summer of 2014 as Christo suggested could happen, I’ll be road tripping to Colorado to spend a few days enjoying the beauty.
Posted by Jeff at 8:29 PM