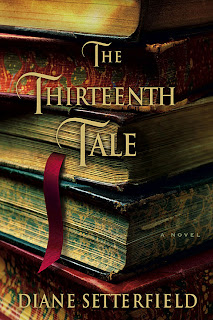 Imagine the cold, damp chill of the English countryside.  It's here we find an old manor with elaborate gardens owned by an eccentric old woman who just happens to be one of the worlds favorite authors, mainly because she's spent her entire life weaving tales of intrigue and suspense, even when talking about her own alleged life.

But now, Vida Winter, our aging author realizes that it's time to tell her real story before she dies.  So she summons a complete stranger, Margaret Lea to write her biography.  Margaret is a shy girl who grew up in an antique bookstore.  She is our guide to the strange story of Ms. Winter's real life.

This is the premise behind Diane Setterfield's debut novel, The Thirteenth Tale. Setterfield is more than competent as she weaves this story of mystery and fable.  Its fascination with the dichotomy of twins manifests itself not just in many of the characters, but also in the way it asks the reader to consider the relationship between fact and fiction.  Setterfield also delivers some delightful references to great romantic writers of the past.  One of the best characters in the book is Dr. Clifton who appears only occasionally but always with a certain flair.  Take this scene when the Dr. is summoned to treat Margaret after she's taken ill and confronts her about her symptoms:


"You are suffering from an ailment that afflicts ladies of romantic imagination. Symptoms include fainting, weariness, loss of appetite, low spirits. While on one level the crisis can be ascribed to wandering about in freezing rain without the benefit of adequate waterproofing, the deeper cause is more likely to be found in some emotional trauma.  However, unlike heroines of your favorite novels, your constitution has not been weakened by the privations of life in earlier, harsher centuries.  No Tuberculosis, no childhood polio, no unhygienic living conditions.  You'll survive."
Dr. Clifton writes Margaret a prescription: "Sir Arthur Conan Doyle, The Case Book of Sherlock Holmes. Take ten pages, twice a day, till end of course."
The Thirteenth Tale charms with its tension-filled moments of subdued action performed by a cast of quirky characters.  And yet, it still doesn't completely satisfy. It's most notable flaw is an ending that tries too hard to deliver unexpected twists and turns, lumbering on for several pages after the story wanted to end.