Note: Some of the photos in this post may not be suitable for all audiences.

I'm way behind on blog posts.  But I still want to document some of the great things I've seen in the last few months.  Like a show I saw at the Sean Kelly Gallery in New York City titled, Robert Mapplethorpe: 50 Americans.  Unfortunately, it's long since closed so you can't see it.  But here was the idea: Ask 50 Americans, one from each of the 50 United States, to select their favorite Robert Mapplethorpe photograph.  It was extra fun because most of those selecting photographs have no real experience with Mapplethorpe or fine art.

This would be a great show just because of the incredible Mapplethorpe prints.  These photographs remind you that even though digital photography is spectacular, there is nothing like a meticulously hand-printed photograph.  But the show added an extra element thanks to the comments of ordinary people talking about the work of one of America's great photographers.  So here are some of the photographs I like best with notes about who picked each and why. (By the way, these photos of photos aren't perfect because I took them with my trusty digital camera which had a hard time dealing with the reflections.) 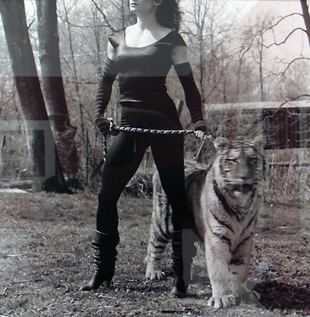 Fred, a rancher, guide, and high school coach from Meeteetse, Wyoming chose this photo of the first World Women's Bodybuilding Champion, Lisa Lyon (1982, Gelatin Silver Print).  Strangely, Meeteetse is only about 30 miles from my home town.  Fred had never experienced Mapplethorpe's work before this project.  Here's a story from Fred that may explain why this was his favorite: "I was attacked by a big bear grizzly in 1997 and my wife informed me that if I wanted to go back to the mountains again, I could only do so with a friend or get some dogs. [My dogs] became the exact tiger in the photo." 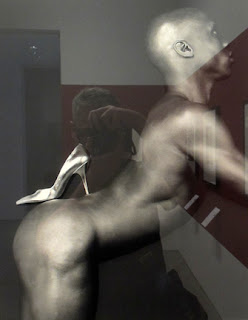 It's easy to associate Mapplethorpe with portraits or with still lifes, particularly of flowers.  But I was fascinated with the way many images were neither, but rather some surprising combination of the two. Take Ken Moody (1985. gelatin silver print) selected by Brenda from Manchester, New Hampshire.  Brenda was also new to Mapplethorpe's work and responded to this work because, "it's sexy but questioning . . .sexual yet reserved. It's sort of like playing peek-a-boo." 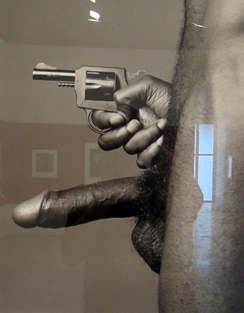 Joshua, a nursing student from Fargo, North Dakota was familiar with Mapplethorpe's work.  That may explain why he was more comfortable with some of the artists more sexually-charged images.  He chose Cock and Gun (1982, gelatin silver print) because of the time it was taken, just as the AIDS epidemic was being noticed by the gay community as a sexually transmitted disease.  He wondered if the image might suggest that, "the penis may symbolize a potentially deadly weapon.  It also speaks to the way that society has fetish-ized black male sexuality and power." 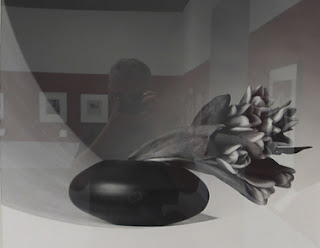 Finally, I couldn't write this post without showcasing one of Mapplethorpe's pictures of flowers.  This is Tulip (1987, gelatin silver print) chosen by McCale, a 29-year-old river guide and teacher from Boise, Idaho.  "To me, this image represents a rather untarnished look at the grace and vigor of the natural form. After being rather shocked at some of Mapplethorpe's more sexual and controversial work, I settled on the tulips as something that embodies both . . . When I look at the image, I see a penis as much as the tulips."
Posted by Jeff at 8:53 PM