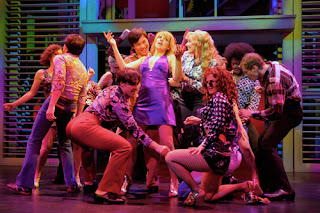 1970s San Francisco is the backdrop for Armistead Maupin's Tales of the City and More Tales of the City.  It's also the inspiration for a new disco-infused, musical production inspired by the novels.  And the musical is almost as fun as the books.

I guess it would be hard for me to not like this show.  I'm a big fan of Maupin's crazy cast of characters.  I like musical theater.  As a teen growing up in the age of disco, I love the 1970s. And if that weren't enough, the music is written by Jake Shears and John Garden, two of the musicians behind one of my favorite bands, The Scissor Sisters. 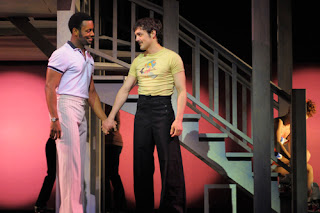 Other things to like about the Tales of the City musical?  The set was fantastic, capturing the fun-house quality of San Francisco's Russian Hill. Betsey Wolfe as Mary Ann Singleton was a musical powerhouse with just the right amount of naivete.  Wesley Tayor was delightful and adorable as Michael "Mouse" Tolliver, just as he should be. 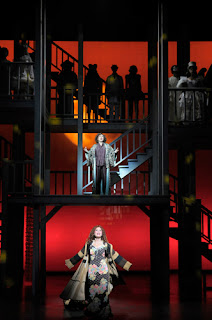 And what good is a musical without a showstopper or two.  Tales of the City delivers with two standout numbers.  There's Homosexual Convalescent Center where Michael and his boyfriend attend a party of snooty, older gay men.  With surprising lyrics and some delightful staging, this party in pink is a whole lot of gay fun. Diane J. Findlay's brilliant portrayal of Mother Mucca reaches absurd levels in Ride 'em Hard.  But it's not just the showstopping production numbers that give this musical its soul.  Paper Faces, performed by Mary Ann and the company is a lovely, emotional song about what we choose to show to and hide from the world. Tony Award winner Judy Kaye as Anna Madrigal ends Act I with another lovely, emotional performance of The Next Time You See Me.

Sure this show may need some tweaking, tinkering, and tightening.  But I agree with a lot of critics that this show is Broadway bound.  Although I'm not sure how kind the critics will be once it hits the Big White Way.  Let's hope New Yorkers will embrace this quintessentially quirky, San Francisco story.  You can count on me for a couple of ticket purchases.