Book eighteen: Tales of the City by Armistead Maupin. 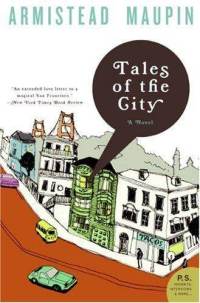 I'm not one to reread books.  With so many books in the world, it seems like there isn't enough time to give a single book the luxury of a second reading.  But with a recent trip to San Francisco to see A.C.T.'s new musical production based on Armistead Maupins Tales of the City and More Tales of the City.  And considering visits made to the neighborhoods featured in the books.  And since the book was finally made available for the Kindle, I decided to reread the first book in the series.

Tales of the City (as well as the subsequent novels) is a Pop-literature wonder.  And I use the term "Pop" in the art-movement sense of the word.  If there are any better literary works that achieve the bigger than life, commercially-fueled mentality of artists like Roy Lichtenstein, Claes Oldenburg, and Andy Warhol, I'm not aware of them.  From the frequent use of consumer brands (there's Aim Toothpaste, Weejuns, and Levi's are practically a character in the book), to the fantastical plot lines, it just seems to make sense that Warhol and Maupin both figured prominently into the 70s, even if it was on opposite sides of the country.  Maybe that "Pop" sensibility is one of the reasons I love Tales of the City.

What else makes these books so good?  Well, first there are the characters.  Mary Ann Singleton's naivete is pitch perfect, particularly for those of us raised in small-town America.  Michael "Mouse" Tolliver is the ultimate boyfriend with just enough naughtiness to make him extra sexy, and just enough vulnerability to make him super adorable.  And Anna Madrigal is one of the best-written characters of the late 20th century with her unending empathy, her boundless generosity (particularly with her home grown pot), and her no-holds approach to living.


Takes of the City is also fueled by outrageous, soap-operatic, and unbelievable plot lines.  There are plot devices in this book that should cause you to roll your eyes and put the book down.  But much of Maupin's talent is to not only make you believe in the outrageousness, but also to make you enjoy the absurdity.

However, if I had to point to just one thing that makes Tales of the City brilliant, it would be dialogue.  No one writes dialogue like Armistead Maupin. It's fast-paced. It's finely tuned to each character; there are times when you know who's speaking even if it isn't obvious simply because each character speaks with such distinctive style.  And it's witty.  After seeing Ira Glass live, I commented that I just needed someone to cue music for everything I said and did in life and I'd be a better communicator.  Now I've decided that if I could just have Armistead Maupin right my dialogue, I'd be unstoppable.

Here are a few of the hundreds of dialogue gems.  Like this moment when Mary Ann informs her mom that she's not returning from her vacation to San Francisco: