Book twenty-one: Last Night at the Lobster by Stewart O'Nan 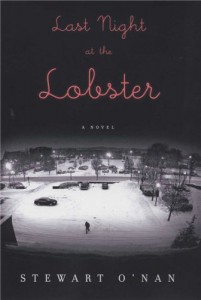 While reading about Stewart O'Nan's most recent book Emily Alone, I came across another of his books that got handsome reviews and had "lobster" in the title.  As the author of Art Lobster, I figured it must be a sign that I should read the book.  So I downloaded Last Night at the Lobster.

Here's a book that seems right for the times.  It's the story of Manny DeLeaon, the manager of a Connecticut Red Lobster that corporate headquarters has decided to shutter, even though it's mildly profitable.  Only four of the employees, including the manager will keep their jobs.  To do that, they'll have to transfer to an Olive Garden in a nearby suburb.  To make matters worse, the last day for the restaurant is December 20, casting a shadow over holiday festivities.

Manny has been a dedicated employee of the company, striving to tow the corporate line and lead by example.  His one wish is to have a perfect last day.  But the world conspires against him.  The staff is limited, because really, why would you show up for your last day if you've been laid off.  And some of the employees who do show up are just plain pissed about the situation resulting in busted windshields and slashed leather jackets.  And then there's the blizzard, which means almost no one will show up for the last dinner at the Red Lobster. As a side note, snow seems to be a prominent literary theme in O'Nan's writing.  OK that's based on having read two of his books.  But I like the way he beautifully writes about snow and how it suggests both an impending sense of doom as well as a cleansing hopefulness.

As someone who has had to deal with the realities of corporate America, and who wonders if business leaders have lost their ability to show empathy for the workers they employ, this book forced me to question many aspects of my life.  And sometimes that just what you want a book to do.