Zen and the art of the Japanese hotel.

It's the little differences that make me love being in a different culture.  And in Japan, it started with the first hotel I stayed at, the lovely Hotel Century Southern Tower. Sure there were the differences I expected like the impeccably restrained service and the strange toilets with all their functionality.  But it's the things I didn't expect that made me most happy.

There were the bathroom freebies.  Oh sure, I'm used to the free shampoo and the occasional sewing kit.  But here you get a tray full of stuff that includes razors with mini packets of shave cream, hair brushes, packets with a hair band and a head band, "cotton kits," shower caps, and some of the designiest toothbrushes I've seen, complete with ultra-mini tubes of toothpaste. 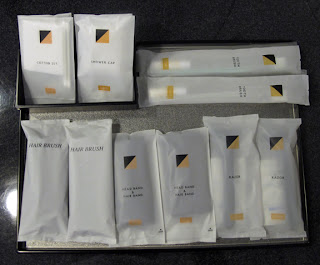 Then there was this geniusiousness, an illustrated guide to the view from your window, so you know the landmarks and buildings you're looking at.

Not a bad idea when the view is this good. 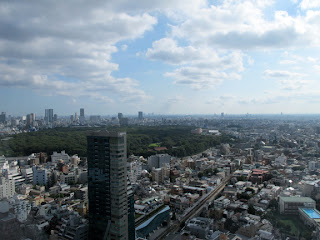 As someone who loves well made ice, I can't not mention the absolutely perfect ice cubes provided on every floor of the hotel.  These cubes are so perfect they look fake, like those used for photo shoots. 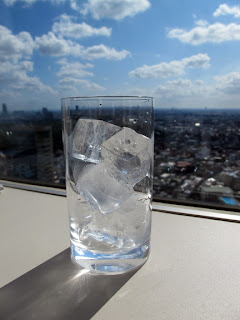 And finally, there's this brilliant idea: no matter how steamy the bathroom gets, there's a perfect area above the sink that never fogs over! I like to shave everyday, right out of the shower.  So for me, this bit of sorcery is spell binding. 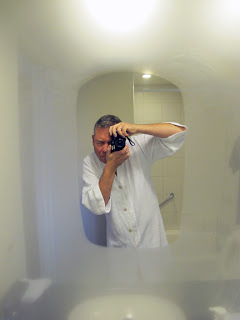 Thanks Hotel Century Southern Tower.
Posted by Jeff at 6:43 PM