Here's a surprise. The Salt Lake Art Center is not open on Sundays, which has always bugged me a little bit because I think Sunday afternoons were meant for museum visits. The surprise? The Church of Jesus Christ of Latter-Day Saints' Church History Museum is open on Sundays.  For an organization that believes in keeping the sabbath day holy, I was pleasantly surprised to discover the Church agrees that visiting a museum is an appropriate activity for a Sunday afternoon.

How did I discover this fact?  Well, I went to the museum as my second stop on Salt Lake City's current circuit of LeConte Stewart exhibits.  There are two shows featuring the artist's work; a joint effort by the Utah Museum of Fine Arts (UMFA) and the Church History Museum.  I started at UMFA to see more Stewart paintings in one location than you'll ever see again.  And all of those paintings represent places in Utah.

The exhibit at UMFA is titled LeConte Stewart: Depression Era Art.  I wasn't expecting to like the show as much as I did.  Stewart's paintings from the 1930s are melancholy, even bleak.  That realization that things were troubling for many Americans during the depression makes this show relevant today.  Here are some paintings I found interesting.

A whole gallery is dedicated to the idea that small businesses struggle in a bad economy.  Hometown businesses shutting down were featured in a number of Stewart's paintings.  As the son of a small business owner, I found these paintings beautiful.  Here's Untitled (The Golden Rule) (c. 1930s, oil on board), my photo may not show the detail, but the business shows torn curtains and broken windows. 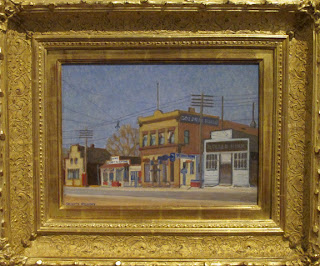 And here is the Green Front (1935, oil on canvas), which shows a general store in Kaysville, Utah owned by W.D. Adams and Sons.  While the store survived the depression, the painting still evokes the realities of doing business in a struggling economy. 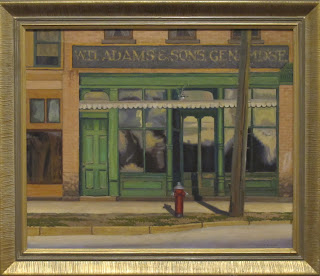 I enjoyed seeing Stewart's painting process in action.  Stewart worked from real life, not from photographs.  He made sketches and then painted studies before completing the final work, and many of those studies were beautiful and on display.

For example, Smith's House (1937, oil on canvas) was shown next to one sketch and two oil studies. 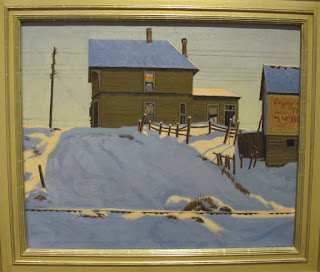 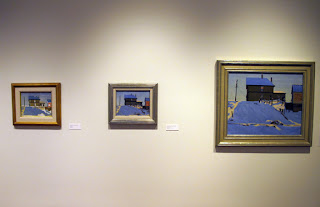 Then there's this photo of a brilliant painting, Approved by Postmaster General (1936, oil on canvas) shown next to a small study for the same painting. 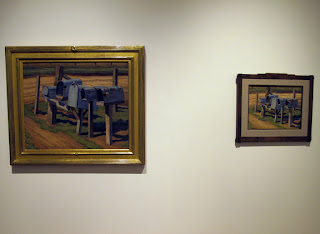 One of my favorite paintings in the show is Private Car (1937, oil on canvas) showing unemployed men hitching a ride on a train in hopes of finding work somewhere else. By the way, what a great title for a painting exploring this subject matter. 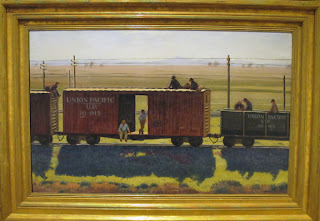 In the study for the painting, the men are absent.  While beautiful, it somehow lacks the same emotional impact. 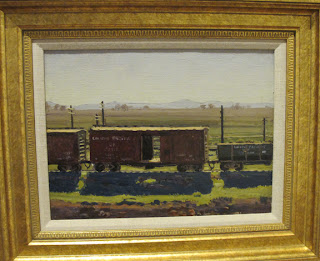 Stewart also had a fascination with houses.  Bleak, lonely houses that were struggling to survive in a time when households around the country were facing foreclosures.  Here's one of my favorites featuring three homes; The Smiths', the Jones', and the Browns' (1936, oil on canvas). 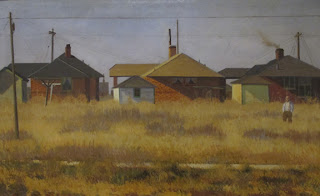 My second stop was at the Church History Museum where the exhibit was titled, LeConte Stewart: The Soul of Rural Utah.  Side note: What's with the carpeting?  I don't think I've ever been to an art museum with carpeting.  Polished concrete? Sure. Hard wood? Definitely.  But carpeting?  But other than the carpeting, this show was displayed beautifully; maybe even better than at UMFA.  Most of the paintings were landscapes which I found less interesting than the introspective paintings at UMFA.  But there were some standouts.

Here's Country Funeral (1948, oil on panel).  This is a painting that forces the viewer to create stories. 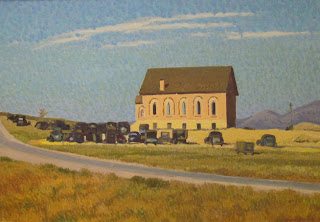 Some of my favorite paintings were about religion.  Stewart was a Mormon.  He was commissioned by the LDS church to paint murals in several temples.  For me, religions are at their best when they're commissioning artists to celebrate their beliefs.  And in this show some of the best paintings are Stewart's depictions of LDS temples in which he painted murals.  I like these paintings for two reasons.  First, they're buildings that are architecturally interesting, built when the church was dedicated to making each temple unique, unlike now when temples seem to be little more than glorified, cookie-cutter stake centers.  Second, I love the way the buildings reference temples built by the great cultures of the Americas; which seems appropriate considering the Book of Mormon's story line.

This is Hawaii Temple Construction (1918, oil on canvas). 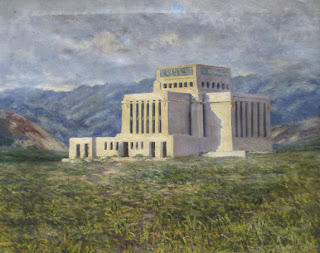 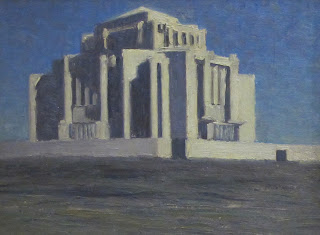