The sunromedy fun from Sundance. 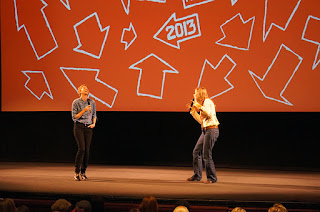 In a recent post, I introduced a new genre of movie that I hope will catch on: The sunromedy, a romantic comedy with the edginess and quirkiness of a Sundance movie.  The movie that inspired the term is "In a World . . . " written, directed, and starring Lake Bell.  That movie won the Sundance Waldo Salt Screenwriting Award. On the second to the last day of the festival, I saw Austenland from director Jerusha Hess who co-wrote the film with Salt Lake City native and University of Utah graduate, Shannon Hale.   Hess is a graduate of Brigham Young University and co-wrote Napoleon Dynamite with her husband, Jared Hess. Hale is the New York Times best-selling author of seven young-adult novels.  This movie, offers a story with a slightly more adult appeal.  This was a little bit of a locals-only dream team.

Austenland is the story of Jane Hayes, a modern young woman who is a self-proclaimed, Jane Austen super fan. That obsession is probably getting in the way of Jane getting on with her life.  But in a last effort to realize her dreams of an Austen-like romance, she spends all of her savings and heads to England for a stay at Austenland.  Once there, she renounces her modern life and lives the life of a Jane Austen character, although maybe not quite as lavishly as she had hoped since she didn't pay for the platinum package. At Austenland, Jane is courted by handsome young men played by actors.  And the charade even promises a proposal of marriage before the week ends.

Jane's adventures are numerous.  She befriends Miss Elizabeth Charming, a delightfully over-the-top guest played by Jennifer Coolidge. She falls for the "non-actor" stable boy Martin played charmingly by Bret McKenzie of Flight of the Conchords fame.  And she even manages to both ignore and romance the cold yet devastatingly dreamy Mr. Henry Nobley.  This Darcy-esk character is perfect as played by JJ Feild.  I challenge any Jane Austen fan (or even non Jane Austen fan) to not fall for Mr. Nobley.

Austenland is a delight. And you really don't need to know anything about the works of Jane Austen to enjoy the movie.  Just the general knowledge of Austen and the time she wrote about will ensure you'll have a good time at this quirky film. I'm glad it's already been picked by Sony for a release later this year.  Because I'd like to see it again, if for no other reason than the numerous, quotable lines.