A roof with a view. 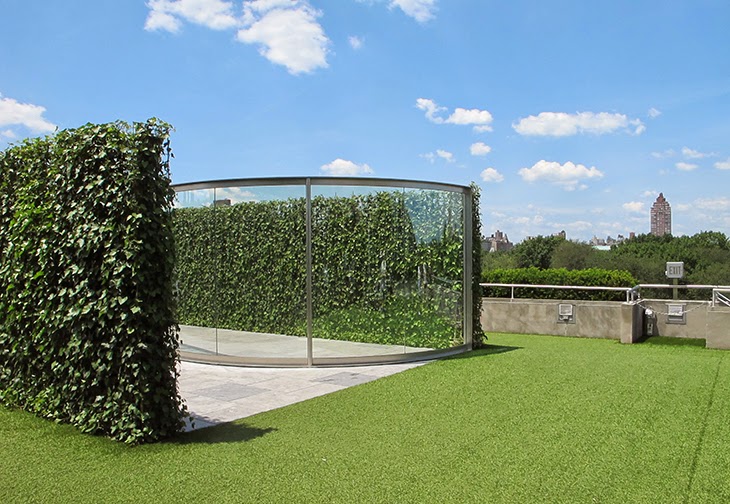 It's become something of a tradition; a visit to the rooftop of the Metropolitan Museum of Art.  Why? two reasons.  One, the view is one of the best in New York City. And two, because every year the Met invites a living artist to install his or her work on the rooftop. Although I should probably just say "his" because like most museums, they are woefully lacking when it comes to presenting the work of female artists.  This was my fifth consecutive visit to the rooftop exhibit and every year has featured male artists. But that's another post.  You'll find links to some of my previous visits at the end of this article.

This year, the roof installation was created by Dan Graham with the help of Gunther Vogt. For the past fifty years Graham has focused on architecture and how it influences public spaces. Since the 70s, one of the ways he's expressed his architectural interests is through the use of sculptural environments that utilize mirrored glass and metal. For this commission he created a work titled Hedge Two-Way Mirror Walkabout which is surrounded by a specially engineered environment created by Swiss landscape architect Gunther Vogt.

This year's installation was a minimalist's garden dream with clean lines and inviting surfaces.  It was surprising to see a lush, well-trimmed lawn covering the entire roof, creating a park-like feel; a park that floats above central park.

The structure was interesting, with it's strange reflective surfaces.  Normally when two way mirrors are used, the space on one side of the mirror is darkened, allowing people in that space to see the other side but not vice versa.  Here, both sides were illuminated by bright July sunlight creating subtle, perception-bending effects.

For example in this picture, Felix is standing on the other side of the glass.  Yet his image appears as a ghostly mirage.

But in this image, I'm not standing on the other side of the glass.  I'm capturing my own reflection in the two-way mirror. But the image almost seems less ghostly.

Of course, you can also have a little museum photo fun capturing faint images in the fat mirror.


Many of the past installations I've visited have been adventurous, almost dangerous, requiring visitors to sign waivers.  Those are still the most memorable.  But there was something peaceful about this installation.  It was a relaxing way to spend a New York afternoon.


Instagrams from this visit:
Past posts from the roof of the Met: