Of bunnies and balloon dogs. 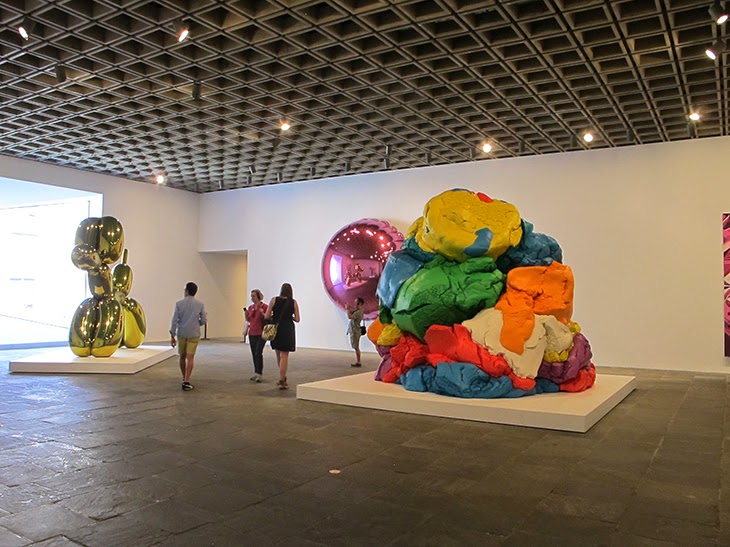 I'm a fan of Pop.  I think it has something to do with the fact that I was born in the early 60s, a time when Pop art, pop culture, and pop music were taking the planet by storm.  I've grown up with Pop..

It's not surprise then, that I went out of my way to see one of the art world's biggest Pop super stars, Jeff Koons. Koons has had a number of large retrospectives but never one in the U.S. Well, until now with the opening of Jeff Koons: A Retrospective, a sprawling show at the Whitney Museum of American Art (the last show before the museum moves to its new Chelsea location).

The art world has a love/hate relationship with Jeff Koons. Museums and their curators love him for his blockbuster spectacles that generate crowds and ticket sales. But many critics love to hate him. And the reviews of this show follow the usual template suggesting that Mr. Koons' work lacks any real relevance or meaning and offers no art-historical value, just mindless fluff.  (For a round up of the review hysteria, check out this brilliant poem created by Carolina Miranda at the L. A. Times. She took the most outrageous lines from a bunch of reviews and ended up with a fine piece of poetry.) But I think those naysayers may have missed the point.  Here are three reasons why:

1. Art critics are their own worst enemies.  Art critics' second favorite thing to gripe about is current art movements.  It's happened throughout history, critics complain about anyone who is doing anything that pushes the limits more conventional, established tastes in art.  But here's the problem, Art critics' favorite thing to gripe about is how wrong previous art critics were.  Considering how much negative criticism has been written about Koons, he's destined to be a darling of future art academics.

2. The critics might actually just be wrong.  I think Jeff Koons' art is more important and meaningful than people give him credit for.  I offer a small sculpture in this show as an example. Listening to Koons and the curators of the show talk about Split Rocker (photo below) you realize this innocent, happy work is really more sinister.  Split Rocker was created when Koons was going through a difficult divorce which involved his Italian porn-star wife absconding with his son to Italy. With that in mind, the playful sculpture seems more sinister, almost violent, with heads that are cut in half and smashed together.

3. Objects matter. Art and history celebrate and revere objects, particularly objects that are made at great cost, with great skill, and in ways that have never been done before.  And Jeff Koons' objects are spectacular. Some objects are so difficult to fabricate it can take decades to arrive at the final sculpture.  Take Play Doh which makes its debut for this show.  It has been in the works for 20 years.  All this attention to creation results in objects that are dazzling, particularly those with shiny, mirror-like surfaces. And boy, do the critics like to make fun of those shiny, mirror-like surfaces.

Of course, I'm not trained as an art critic so I doubt anyone is going to take my thoughts on Jeff Koons seriously.  But I am qualified as a contemporary art fan.  In fact, I'm about a big a fan as anyone I know.  And as a fan, Jeff Koons: A Retrospective, with its gasp-inducing galleries and works of art that seem made for selfies, is a dang good time at a museum.  So enough blathering on about critics and the meaning of art.  Let's look at some pictures.

The galleries in the show were arranged chronologically which meant starting out with vaccuum cleaners.  I think these works baffle people as much as any of Koons works.  He's channeling the "ready mades" of Duchamp.  But these seem to be doing more than just asking, "What is art?"  Instead asking questions about air and it's role in human lives, also a theme of the bronze life raft.

There are more trains in Koons work than you realize including this exact, stainless steel replica of a Jim Beam collectible decanter.  It's actually filled with Jim Beam bourbon complete with official seals from the distillery.  You can see Kara and Felix trying to find all of the seven seals.


I think Rabbit was the first Koons work I ever saw in person.  It's still perfectly charming, yet a little creepy.

These works, including Split Rocket from the Easy Fun series are just that.  Or are they.


Koons' Celebration series features several of his most famous works including the balloon dogs.  But fear not friends of the felines.  Koons does cats too.  Like the massive Cat on a Clothesline.  This picture really doesn't show how big that thing is.

Unbelievably, this is the first time I've seen one of Jeff Koons' balloon dogs in person.  But for a long time I've been fascinated with the way Koons has been able to take an icon as ubiquitous as the lowly balloon dog and make it his own.  You almost can't look at a balloon dog without thinking Koons.  And it's fun to see all the knock offs that have appeared including one that provoked Koons to sue an art gallery.  Although Koons seemed to quickly realize, you can't own the intellectual idea of a balloon dog. That certainly hasn't stopped him from trying. Balloon Dog (Yellow) was even more fun and intriguing than I expected.


Play Do is based on a creation by Jeff Koons' son.  It took twenty years to finally complete the work.

Hulk (Organ) is a functioning organ, although sound is reportedly not pleasing. When played, it sounds something like a race car.  The curators decided it was too unpleasant to play within the gallery. That's lame.
This is the heaviest piece in the show weighing in at 15,000 pounds.

I find these later Koons' paintings with their art-historical references appealing.

This is what happens when balloon dogs meet ancient fertility figures.
I love how some of Koons' metallic finishes create extreme, abstract imagery.

Finally, the reason my social media persona is named "Art Lobster" has to do with lobsters in art. It seems that throughout the history of art, lobsters have been a popular source of inspiration.  I don't know why, but it surprises and amuses me. There are the myriad still lifes featuring lobsters created by the great Dutch painters and others. There is the lobster weirdness dreamed up by Salvador Dali (a major influence for Koons). Roy Lichtenstein created pop-infused lobster still lifes. Not long ago John Baldessari even created an interactive lobster art work. And of course, there are the lobster works of Jeff Koons.  These works are highly influenced by Dali and Duchamp and yet deliver a fresh take on lobsters in art.


Since Art Lobster is mostly a personal review of things I see, do, and read, I've decided to start also including links to Instragram photos from the events I write about. Here are photos from the Whitney's Jeff Koons Retrospective.

Previous posts that include references to Jeff Koons: