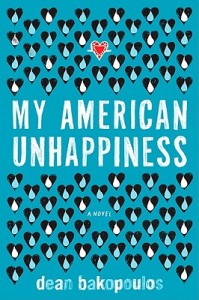 Wow, the current depressing state of politics and the economy has totally invaded my reading choices.  It seems the last several books I've read are expressions of the current state of affairs in America.  None captures this national zeitgeist better than Dean Bakopoulos's My American Unhappiness.  It's a good thing this book is infused with a lot of ingenious humor, otherwise it would be a total downer.

Written in first person, this is the story of Zeke Pappes, a quirky character who runs a Wisconsin humanities institute.  After losing his first wife, Zeke's life is overtaken not only by his job, but also by his mother and twin nieces (April and May) all of whom now live with  him. His mother is dying of cancer and worries that as a single man, he's the wrong person to take care of the nieces after she's gone. Zeke learns that his mother's will stipulates that unless he is married, the beloved twins will fall into the custody of his sister-in-law.  The result: Zeke takes the advice of a woman's magazine and pursues a fiancee.

At the beginning of the book, I worried that the first-person voice somehow couldn't effectively communicate the strangeness of the main character.  I wanted to see Zeke through the eyes of someone else.  But as the book progressed, I realized that Bakopoulos was using voice in a clever way.  It becomes obvious that Zeke doesn't realize how off-tilt his life has become.

Bakopoulos's writing delights, largely due to the literary devices he sets up from the beginning of the book. The titles of projects funded by Zeke's humanities institute (which are generously scattered throughout the book) give the story a strange wit.  A few of my favorites include The Weather as Divinity in World Literature, The Miracle of Found Objects: Joseph Cornell and the Assembled Language of Loneliness (yes, that would be a Joseph Cornell reference!), and Kirkegaard's Labels: Multicultural Identity Politics and the End of Community.

Zeke's personal project, A Survey of American Unhappiness (for which Americans are asked "Why are you so unhappy?") also adds to the novel's distinct personality thanks to quotes from respondents who blame their unhappiness on all manner of things.