Maybe it's time for a new toy car.

I'm the proud owner of a Scion XB.  And it's not one of those new curvy versions.  It's the original boxy version.  I love its utilitarian, toy-car design.  I've had it for seven years so I've started thinking about what my next car will be.  Unfortunately, there aren't many cars out there that have inspired my imagination.

But like me, the Japanese love their utilitarian, toy-like cars.  And those cars are head turners.  So here's my plea to foreign car manufacturers: Please bring your adorable cars to the U.S.  Here are a couple I'd be happy to own.

I'm in love with the Daihatsu Tanto.  Seriously, I would totally go for a tricked out version of this ultra-cool, toy car. 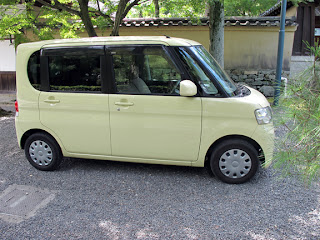 Suzuki has a whole slew of fantastic, boxy cars that made me happy.  My favorite is this vehicle, which I could never find parked so I couldn't figure out what it is called. 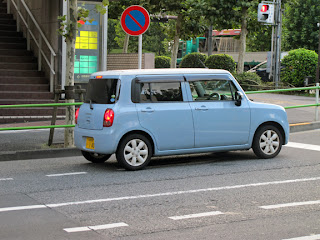 I know car companies think we Americans aren't interested in these types of cars, but I think they're wrong.  From Scion, to Volkswagen, to Fiat, I think there are a lot of Americans who have demonstrated that we love the quirky foreign cars.  I'm totally ready to buy an ultra-cool, Japanese toy car.
Posted by Jeff at 9:30 PM